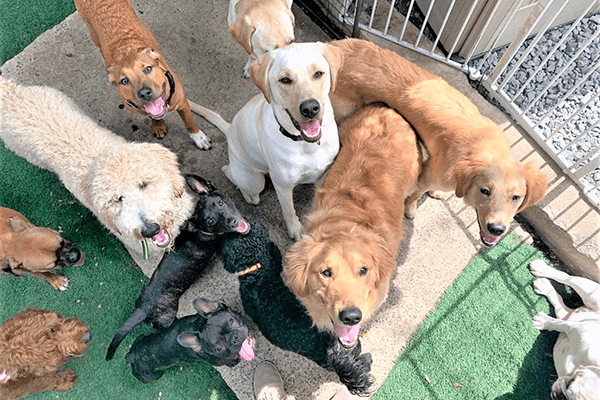 Brittanie Mendez, owner of Paw Pals, a doggie daycare, grooming, and boarding facility, opened her business in the Garner Arts District more than a year ago. Being located in one of Rockland County’s most unique arts-driven and retail-friendly environment is shaping the trajectory of her business.

“When I originally looked at space here, I knew I was home,” said Mendez.

Now, Mendez wants to make her “home” a better place by sponsoring Barks N Brews, a festive arts-driven event to raise money to improve the path that runs alongside the creek behind the Garnerville complex. Hudson Mills, Industrial Arts Brewing Company, La Sirena food truck, and others will co-sponsor the Oct 12th free event that runs from noon to 4 pm.

At the heart of the event will be an arts project spearheaded by the North Rockland School District. Students are designing a large canvas portraying Garnerville’s smokestack, a symbol of its early industrial days when it was a factory complex. For the festival, the canvas will be divided in small squares for festival attendants to purchase and paint. Then the squares will be stitched together. Money raised from the purchase of the squares will be donated to the Creek Walk project. The finished canvas will hang at Paw Pals.

“Kind of like a paint by numbers project,” said Mendez.

Mendez grew up in a “restaurant” family and worked in the industry for many years. Her father is Angelo Rubino, who owns Nyack Seaport. But she wanted to blaze her own trail. A dog lover, she started Paw Pals, a dog walking and pet sitting company six years ago.

Ready to grow her company into a full-fledged doggie daycare, grooming and boarding facility, Mendez hunted for a location. Two earlier locations – a strip mall and an industrial warehouse in Orangetown – both fell through. At the time, real estate rollercoaster was stressful but ultimately Mendez said the “universe puts you in the right place.”

After Mendez learned about the Garnerville Arts District, and took the 2,500-square-foot space, she called her gramps Pedro Vargas. Her grandfather told her he’d worked in the dye factory when he left the Dominican Republic and immigrated to America.

“I have a heart for this place,” she says.

Paw Pals, which is bonded and insured, employs 25 full-time and part-time employees. The doggie daycare facility, which is indoor and outdoors, takes up to 30 pooches at any given time, and operates from 6:30 am to 7 pm on weekdays and 7:30 to 6 pm on weekends.

“These are way better hours than my son’s daycare,” Mendez quips.

The company also runs the Tail Waggin, a van that transports the dogs to and from daycare.

Garner Arts District has been attracting a growing raft of new businesses. Many of the spaces are raw and need a lot of work. Mendez said it took many months and nearly $80,000 to build out her space. New HVAC and an air exchanger – which moves the air in and out 15 times an hour – accounted for 20% of the expense, while plumbing, rubber matting, and outdoor cleanup added to the price tag.

Mendez also notes she did not have to jump through any hoops for permitting. Her use was permissible and she said she received nothing but complete support from the Village of West Haverstraw’s mayor Robert D’Amelio.

For now, Mendez is building Paw Pals but this entrepreneur always has an eye toward the future.

“I could envision one day having a restaurant that is attached to a doogie indoor park where humans can enjoy a meal while dogs play in a controlled environment,” said Mendez. “There’s nothing better than food and dogs to bring people together.”