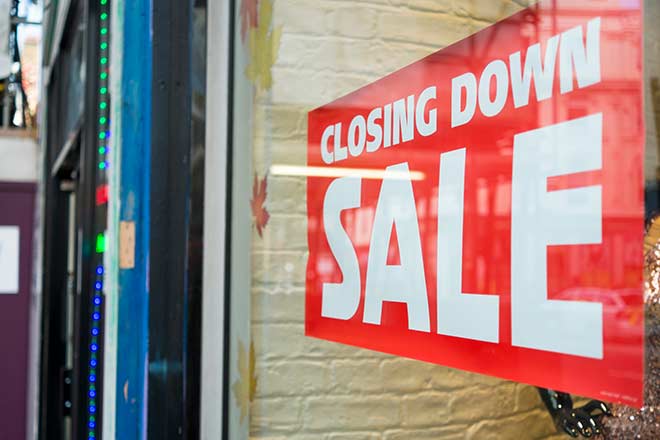 Pace Of Store Closures Up Over 2018

The incredible shrinking retail landscape continues to diminish, and Rockland County is feeling the contraction. Empty stores fronts in the Route 59 corridor and in the Palisades Center are victims of the retail apocalypse, a syndrome occurring nationwide as a response to both a glut of retail as well as a migration to online shopping. And now with a potential recession looming and a tariff war, the prospects of a healthy retail scene looks even more pessimistic.

According to a new report from global marketing research firm Coresight Research, there have been 29% more store closings announced in 2019 compared to all of 2018. Based on Coresight Research’s figures, retailers’ earnings reports, bankruptcy filings and other records, more than 7,600 stores are slated to shutter this year and thousands of locations already gone.

Bankrupt footwear company Payless ShoeSource, which closed its remaining U.S. stores in late June, accounts for about 37% of the closings.

The “going-out-of-business” sales and liquidation of other brands is expected to continue. Coresight estimates closures could reach 12,000 by the end of the year, the report said.

Coresight, which has offices in Manhattan, London and Hong Kong, tracked the 5,864 closings in 2018, which included all Toys R Us stores and hundreds of Kmart and Sears locations.

The record year for closings was 2017, with 8,139 shuttered stores, Coresight found. This included an earlier round of Payless closings, the entire HHGregg electronics and appliance chain, and hundreds of Sears and Kmart stores.

The pain is expected to continue, according to an April report from UBS Securities. UBS analysts said 75,000 more stores would need to be shuttered by 2026 if e-commerce penetration rises to 25% from its current level of 16%.

A separate analysis by UBS said tariffs on Chinese imports could put $40 billion of sales and 12,000 stores at risk.

“The market is not realizing how much brick & mortar retail is incrementally struggling and how new 25% tariffs could force widespread store closures,” UBS analyst Jay Sole wrote in the May report. “We think potential 25% tariffs on Chinese imports could accelerate pressure on these company’s profit margins to the point where major store closures become a real possibility.”

Thousands of locations have already closed this year with the final Payless stores finishing their liquidation sales in June. All Charlotte Russe stores closed in April but the company’s new owner has started to open new stores.

Dressbarn: 649. Here are the locations closing in July and August.

Over 7,000 store closings have already been announced in 2019. Time

Some of the announced closures may carryover into 2020, which was the case with several closings announced in late 2018 such as Lowe’s, Sears and Kmart. Gap Inc. announced Feb. 28 it would close roughly 230 stores over two years. Some retailers also are opening new stores while closing locations including Bath & Body Works and Abercrombie & Fitch.

GNC: 192 stores closed in first six months of year; up to 900 over the next three years.

Family Dollar: As many as 390 stores

Gap: Roughly 230 in next two years

Foot Locker: 165, total includes closings outside of the U.S.

Signet Jewelers: The parent company of Kay, Zales and Jared said it would close another 150 stores.

The Children’s Place: Up to 45

Build-A-Bear: Up to 30 over two years