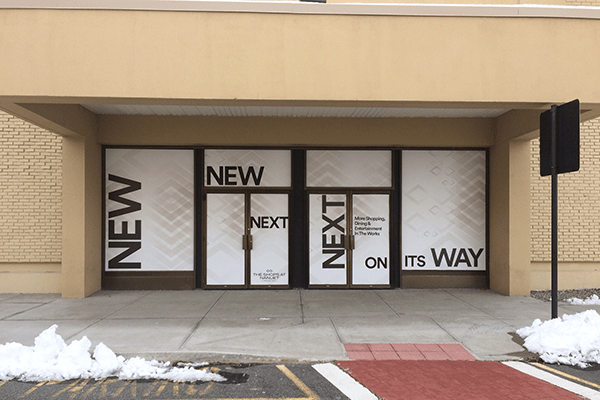 The former Sears department store building and auto center sit vacant for now but it is only a matter of time before Simon Properties Group decides what to do with the structures.

Clues to their intentions likely point to the prevailing trends in mall evolution, which are transforming nationally, and internationally from retail-driven destinations into mixed-use developments that include hotels, housing, offices, open spaces, and more.

No plans have been submitted to the town but discussions are under way. The parcel sits in an RS or “regional shopping” zone, which would allow for mixed-use development but a residential component would require a zoning variance or a text amendment.

“You don’t have to fill retail with retail anymore,” said Greg Maloney, head of JLL’s America retail business. Mixed use is the new wave, and anything is fair game — there’s no such thing as a cookie-cutter solution anymore.

One in four malls could close by 2022. In 2017, 105 million square feet of retail space shuttered; in 2018, that amount was 90 million square feet. Neither The Shops of Nanuet nor The Palisades Center have been immune to the shrinking retail industry, particularly among high-end brands and department stores.

Mall vacancy rates, an effect of closures, climbed during the first quarter of 2019 to 9.3% from 9% in the fourth quarter of 2018, according to real estate research firm Reis. This is the highest vacancy rate the firm has tracked since the third quarter of 2011, when it was 9.4%.

With online sales accounting for 19.1% of total retail sales in 2018, it is no wonder that brick-and-mortar retailers are hurting, and looking to reinvent themselves.

Simon has been adding new types of tenants to its malls in a bid to keep its shopping centers relevant. That includes taking some of its assets and turning them into “mixed-use” centers with apartments, hotels, office buildings and fitness centers. At Simon’s Phipps Plaza mall in Atlanta, for example, it’s adding a Nobu Hotel and a 90,000-square-foot Lifetime Fitness complex.

Simon has said it would partner with Ohio-based marijuana company Green Growth Brands to open 108 locations selling CBD products this year at its properties, including Roosevelt Field Mall in New York, and The Galleria in Houston.

Marriott International says it will open five hotels at Simon malls over the next few years, adding to the roughly 15 Marriott already has at Simon’s properties.

“There is a great synergy when you combine Marriott’s innovative hotels and Simon’s exciting shopping, dining, entertainment and mixed-use properties,” said Patrick Peterman, Simon’s vice president of development and asset intensification. “The uses are very complementary. We’ve recognized this for a long time.”

Construction recently began on the AC Hotel by Marriott at Sawgrass Mills in Florida. Slated to open in late 2020, the eight-story, 174-room hotel will be located near The Colonnade Outlets at Sawgrass Mills.

The old model of signing a few anchor stores and watching the foot traffic roll through is clearly over. Malls that will survive the age of online shopping are the ones that draw people in for reasons beyond simply shopping — often by giving them a place to live or work.

The owners of Westfield Garden State Plaza in New Jersey are planning to transform the region’s largest shopping center into a “downtown”, with luxury, mixed-used residential development where mall lovers can live. The plans include re-purposing three large vacant spaces at the mall to accommodate 20 new retail tenants, and transforming a major part of the parking lot to include a mixed-used residential complex, a three-acre public park, a seasonal hockey rink and potentially an upscale hotel. To compensate for lost parking, the plan calls for expanding the mall’s parking decks.

The Shops at Nanuet is adjacent to the Nanuet TOD, the large swath of land to the south and east of the shopping complex that has been rezoned to attract residential housing and ground-floor retail to replace blighted industrial uses. Additionally, two new hotels are planned along Route 59. Does Nanuet need another hotel? Will there be additional demand for residential housing so close to the TOD? What gaps in the market make sense for Simon to fill in the heart of Nanuet? We shall soon see.