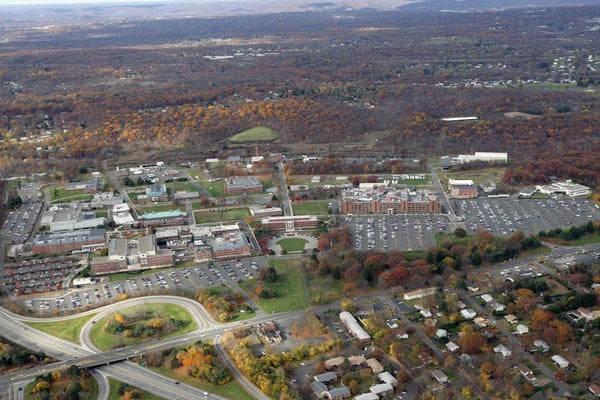 Struggling to reinvent the sprawling Pfizer campus in Pearl River, the New York Center for Innovation (IRG) is considering turning Building 100 into studio and one-bedroom apartments.

IRG, which bought the campus in 2015 for $40 million, says the nearly 1 million square foot building would be perfect for a residential conversion because the building has 16-foot ceilings and other architectural assets such as columns.

However, the campus is not zoned for residential use.

“Any project like this would most likely need a zone change,” said Town Attorney Robert Magrino.

Town officials, who’ve been approached by IRG with the prospective plan, have said they are taking a wait-and-see approach because the developing Pearl River Transit Oriented Development (TOD) could bring several new units to Orangetown.

Supervisor Chris Day has noted that there’s a dormant New Jersey Transit-Metro-North Railroad train station on the IRG campus, and reviving that train stop could be advantageous if housing became a feature of the campus.

A renewed interest in downtown revitalization around train hubs in Rockland County makes perfect sense. Commuters, especially millennials working in New York City, are looking for places to live. So are empty nesters who want to downsize but stay in the suburbs. Multi-family housing and retail brings more life and consumers to downtown.

The Town of Orangetown has completed a “Pearl River TOD Opportunities Analysis,” which will trigger rezoning proposals, infrastructural improvements, land-use assessment, and community input. The study reveals Pearl River is “well positioned physically and economically for some kind of infill redevelopment.” The land in and around the train station “could accommodate a greater mix of uses, higher intensity of land use, and taller buildings.”

IRG, which bought the former Pfizer campus in 2015 for $40 million, is hoping to attract tenants in the life sciences industry. Since acquiring the 200-acre campus, IRG has leased 200,000 of its 1.9 million square feet.  There are 38 buildings of laboratory, pharmaceutical, manufacturing and other support buildings. Pfizer retained 25 acres of the campus for its research and development functions. Current IRG tenants are Pfizer, Sanofi, Profectus, Biosciences, Urban Electric Power and NuBiyota.

In January, the New Jersey-based RK Pharma, a drug company that develops injectable and oral pharmaceuticals, signed a long-term lease with IRG (Industrial Realty Group, LLC) for 83,000 square feet in Building 215 and its annex.

Short of finding a “unicorn,” the company does not expect to land a single tenant; rather it is making a push for smaller labs. IRG is making a big push to attract hemp processing plants to the campus, recognizing that the CBD market is a burgeoning and growing industry.

“This is a good fit for hemp processers,” said Greg Stanton, IRG’s general manager and vice president. “Pfizer manufactured drugs here so all the FDA guidelines, the security levels, the right filtrations, air qualities – everything is in place.”

Although the goal is to lease up the site for life sciences companies, IRG has over the past two years attracted film crews to the versatile campus. The site is certified as a “Qualified Film Production Facility” and has been featured on a variety of television shows and films including: Blindspot (NBC), Orange is the New Black (Netflix), Gotham (Fox), The Punisher (Netflix), The Tick (Amazon) and BlacKkKlansman (a Spike Lee film).To date, crews have filmed on site for Blindspot, The Code, Blackkklansman, Blacklist, and others.