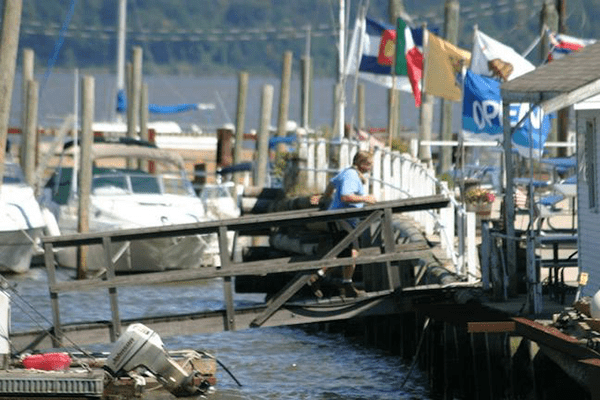 Running a marina is not child’s play but the Schneider family toughed it out at the Tappan Zee Marina in Piermont for more than 50 years. The family-run business, founded by Roger and Natalie Maffei, and later run by their daughter Audrey Maffei Schneider and her family, has been a village fixture and a testament to perseverance.

Now the fate of the marina rests with a new owner and the third-party management company he has hired to run the facility at 695 Piermont Avenue.

In April 2018, Manhattan resident Andrew Impagliazzo bought the land occupied by the marina, Pier 701 restaurant, and a residential house for $4.25 million. The additional price-tag Impagliazzo paid for the Tappan Zee Marina business is undisclosed.

Like so many businesses today, third-party management companies are called in to run day-to-day operations but some seadogs say the trend is unusual in New York.

“I haven’t run into a lot of third-party companies running New York marinas, and I’m pretty familiar with marinas from Montauk to Buffalo,” said Gabe Capobianchi, president of the Empire State Marine Trades association. “Most marinas are family-owned, and are passed down to the next generation. There are a small number of marinas that are owned by corporations like Marine Max.”

Audrey Maffei Schneider, like many marina owners, knows how tough the business can be. Taxes on the property in Piermont are more than $92,000 annually. Many marina owners cave into the temptation of offers from developers, who want to build waterside condo projects. Inclement weather and major storms like Hurricane Sandy add greater pressures. Marinas typically take a hit when the economy sours, as Tappan Zee Marina did after 2008, though they bounce back when the economy is bullish, as it is now.

“My sons didn’t want to inherit the business, so it was time to sell,” said Schneider. “It was a hard decision but it was time to move on. In the marina business, you work seven days a week from April to mid-December.”

Perhaps that’s why management companies are tempting to some.

Kirk T. Gautreau, Jr, Oasis Marinas’ Chief Operating Officer, says marina management companies have been around at least two decades and the trend is becoming more robust because of demographics. Many baby boomers who own marinas might not have children who are interested in carrying the baton, and while they’re not ready to sell, they need help running their operations. In some cases, bringing in outside management is a “pathway to a sale,” because management companies work to put the operations in ship-shape.

The 63-slip, full-service Tappen Zee Marina, which has the capacity to someday accommodate 100 slips, has its challenges. During the Schneiders’ reign, they moored boats, mostly speed boats, ranging from 20-feet to 36-feet because of the size of the docks and the depth of the water. Oasis says every slip is spoken for, and there is a waiting list. The marina has fuel service and a ship store.

Brutal northeast winters require much more dock repair and replacement than marinas in the mid-Atlantic.

Some of the Schneider family’s employees have stayed on with the new owners. George Wunschel, Oasis’s general manager who oversees the Tappan Zee Marina, says there are about eight employees.

Wunschel, who’s worked at marinas and in coastal communities in Montauk and Sag Harbor, says Piermont is a quieter community with mostly smaller boats and boaters who come ashore, have a meal at Pier 701 and spend time on their vessels.

“The boaters do their own thing and the village does its own thing,” said Wunschel. “It’s a little bit of an enigma based on my experience in coastal towns for twenty-five years. Many places take advantage of their marinas, feature them. (Piermont shops and restaurants) are relatively close, within a half mile but for whatever reason, they don’t really do that.”

Observers say the new owners have been sprucing up the marina. Schneider is optimistic about its future, even if it is one of the few remaining marinas in the county.