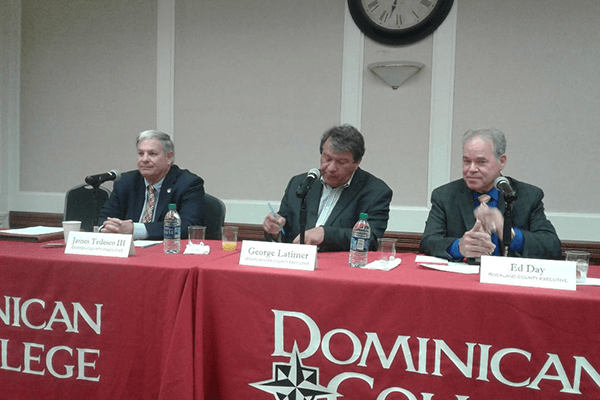 The nation’s political divide has stalled progress on infrastructure projects and other economic initiatives but local county executives from both sides of the aisle say they are collectively focused on regional issues driving the economy.

The three regional leaders collectively bemoaned the federal government’s inaction on the Hudson Tunnel project, compensation for 9/11 responders, and SALT, the new tax plan that has had an unfair impact on the region.

“If we can’t move people in and out of the metropolitan region, the economic impact will be very bad,” said Tedesco.

At least twice, Latimer said he supported Day’s invitation to lure Amazon to Rockland, after the giant company withdrew its plans to relocate in Queens. Amazon apparently did not RSVP.

“What’s good for the region is good for us,” Latimer added.

What became clear during the panel discussion was an acknowledgment that the region, and the nation, is undergoing a sea change in economic development. Adaptive re-use, reinventing existing corridors, new configurations in how we work, and entrepreneurial drivers are calling for new ways to think about existing and future development.

“Business is changing,” said Latimer. “Smaller organizations are our future. We are less likely to fill our large buildings with one company.”

Westchester County is experimenting with Element 46, an incubator program that will give solo entrepreneurs an opportunity to use county-owned space to grow a business, and to avail themselves of resources like SCORE.

A cohort of 15 selected entrepreneurs will be housed in a number of co-working locations in the county and paired with some of the best minds across business, innovation, and the investment community.

“This is like Shark Tank,” said Latimer. “If we provide physical space and capital, we will see businesses grow, and perhaps we’ll have a bio-tech industry cluster like Silicon Valley. This kind of support is the first step in that direction.”

Day echoed the sentiment, saying “It’s critically important to have small businesses thrive,” adding that Rockland’s SBA has given out more than 125 loans. But he also said he wants to see the Palisades Center, a major tax generator in the county, negotiate with Clarkstown to reach a settlement over the protracted legal dispute concerning the mall’s desire to use 250,000-square-feet on the fourth floor that is empty.

“If large malls don’t redefine themselves, they will shut down,” said Day.

In Westchester, offices and large spaces are being converted into residential use. “Adaptive re-use is happening in ways we haven’t seen before,” Latimer said, adding that when he was a child growing up in the county, families shopped downtown. Then strip malls came along, followed by outdoor malls, which were eventually usurped by indoor malls.

“Now it’s time for another iteration,” he said, adding we need to provide “incentives for repurposing.”

While Westchester and Rockland are feeling the brunt of a retail reset and the collapse of many large chains and vacant storefronts, Tedesco says Paramus is “the number 2 zip code in retail sales.”

He cites the revitalized Bergen Town Center, which has created a niche marketplace for value retailing, but he also says Garden State Plaza is shifting its focus to 500 residential units and an office pad.

“Developers come here because we make sure they get what they need,” he said.

There is much anticipation over the forecasted late fall opening of the American Dream Mall of America, Meadowlands in Bergen County. The $3 billion retail and entertainment destination, which is being built by developer Triple Five, is a concept without parallel.

The American Dream Mall, which will be 55% entertainment, will include an 8-acre water park, an 8.5-acre Nickelodeon Universe theme with two record-setting roller coasters — the Spinning Coaster, the tallest and longest free-spinning coaster in the world, and the Euro-Fighter. There will be a huge LEGOLAND Discovery Center with a 4-D cinema. The mall is expected to be the largest indoor theme park in the western hemisphere when it is complete.

Many in Rockland worry what impact the new mall will have on the Palisades Center.

Hopefully, the spirit of regional cooperation and collaboration will abound.