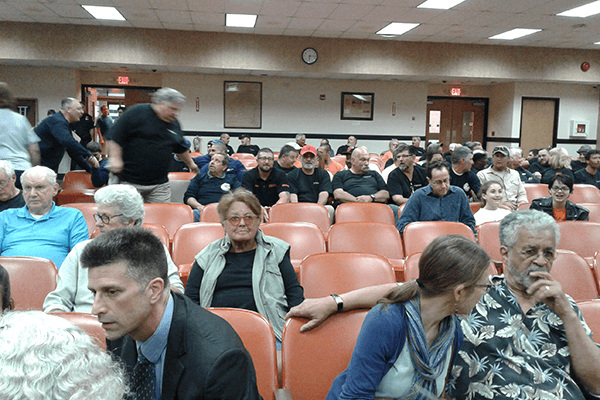 The Clarkstown Town Planning Board threw Suez a curveball at a public hearing Wednesday night after a last-minute discovery that the water company, which is seeking site plan approval to relocate its headquarters to Tilcon’s former offices at 162 Old Mill Road in West Nyack, plans to install a generator that requires nearly 500 gallons of diesel.

The revelation, which came at the end of a two-and-a-half hour meeting focused mainly on the results of a traffic study for the project, appeared to be the speed bump that led the board to postpone any site-plan decision on Suez’s application.

The discovery reignited the inflammatory issue of having fuel storage at the site, which is less than 400 feet from Lake DeForest, Rockland County’s only drinking source. In response to public outcry and concern from planning board members, Suez last month scrapped plans to locate two above-ground fuel storage tanks for 8,000 gallons of gasoline and 2,000 gallons of diesel for their fleet of trucks and cars to fill up on site.

“We never knew about the generator,” said Planning Board Chairman Gilbert Heim. “This is the first we heard of it.”

An audible gasp reverberated throughout the packed room, which included scores of residents and more than 30 of Suez’s union workers who were there to show support for the application.

“When did you learn about the generator?” Heim asked Joe Simoes, the town’s planner.

To occupy the building, Suez says it needs a generator that can run its facility for a consecutive 24 hours. The generator on Tilcon’s site is inadequate. Suez wants to replace it with a diesel-powered generator that holds nearly 500 gallons of diesel. The planning board said storing diesel fuel on site raised the same issue as locating two storage tanks that had been removed from the proposal due to concern over the potential for a diesel spill to contaminate the reservoir.

Board members reminded Suez that removing the original gas tanks had made the application more acceptable. They suggested Suez consider a natural gas-run generator but Suez’s engineers explained they had consulted with O&R on the issue, and learned that a gas line installation was both impractical and expensive.

Suez’s attorney Lino Sciarretta asserted the diesel tank was outside the scope of the Planning Board’s purview.

It is likely Suez will have to go back to the town again with a revised site plan.

Suez plans to lease the existing Tilcon building for offices for construction staff, management and customer service employees. Suez wants to add a 60,000-square-foot storage yard with a 10,400 square-foot building that will be used to park its fleet of vehicles and store materials needed to maintain its water system including pipes, hydrants, valves, etc. Suez said the new site will better comply with ADA (American Disability Act) requirements.

The proposed plan on 26 acres would involve creating 48 new parking spaces for a total of 141 in the parking lots to the east and south of the existing building. Nearly 7 acres, or 305,000 square-feet of land-disturbance, primarily paving and the building of the new structure mandates the installation of an extensive storm-water management system. The site lies within a few hundred feet of Lake DeForest. The plan calls for the removal of more than 270 mature trees.

Residents fighting Suez’s plan want the planning board to call for an additional environmental review of the entire project. They have a host of concerns including the potential for storm water runoff to contaminate Lake DeForest. Other issues raised include the impact of deforestation, harm to wildlife habitat including the endangered bald eagle and bog turtle, a change of character to Old Mill Road, a historically-designated byway, the consequences of gasoline leaking from trucks and other particulates running downward toward the lake and traffic.

Proponents of the plan say Suez is a good corporate steward of the environment. The company provides jobs and is responsive to neighbors’ concerns.

While Suez has characterized the application as “unlisted” under SEQRA (State Environmental Quality Review Act), those who oppose the plan, including Rockland County Legislator Harriet Cornell and State Senator David Carlucci, are calling for a “Type 1 action,” which presumes that the project will have adverse environmental impacts and mandates study. The town’s Director of Engineering and Facilities Management Dennis Letson has said the application was a “Type 1 action”.

However, Suez was told to conduct a traffic study.

Both the traffic expert hired by the applicant, and the town’s consultant concurred the traffic impact was minimal at most intersections except the Four Corners in West Nyack, which would be aggravated by more delays.

“The traffic study was not needed; it was an exercise,” said Michael Galante, managing principal of Frederick P Clark Associates Inc. “This is the same traffic pattern as the former Tilcon office but with a different name on the front of the building.”

Galante said based on the study of seven intersections the traffic impact will be the same as it was when Tilcon’s office workers were at the building. But planning board member Edward J. Guardaro, Jr. who said he had not had an opportunity to look at the study, had more questions about what kind of vehicles Suez would have on site.

New City resident Laurie Seeman, who spoke during the public hearing, said residents had not been given enough time to review the traffic study.

“We were in Supervisor George Hoehmann’s office on Friday and we asked if he had seen the traffic study,” said Seeman, referring to a meeting held with a group of concerned citizens. “He said the traffic study was not yet in the building.”

Echoing those sentiments, Susan Shapiro, an environmental attorney, said, “Two days is not an adequate amount of time for the planning board members and the public to have a meaningful opportunity to read, review, and consider the highly technical 167-page traffic study.”