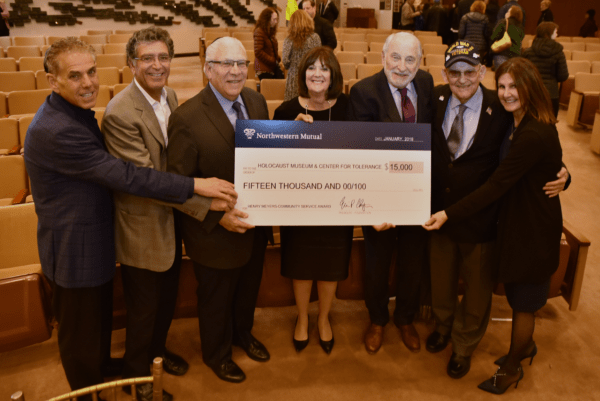 The Holocaust Museum & Center for Tolerance and Education received a $15,000 donation from Northwestern Mutual Foundation’s 2019 Community Service Awards. The award was given on behalf of Hank Meyers, a Wesley Hills resident and a senior financial representative for the company.

Each year, the company recognizes its financial professionals for their passion and dedication to community support through volunteerism. Meyers presented the grant on Sunday at the museum’s Yom HaShoah (Holocaust Remembrance Day) community-wide commemoration.

Meyers has been involved with the Holocaust Museum & Center for Tolerance and Education in Suffern for more than a decade, serving as a community supporter, fundraiser and member of the executive committee on the board of trustees. He guides operations, consults with the executive director and has helped lead the museum’s capital campaign to build its new permanent exhibit and educational space at Rockland Community College. Meyers also strives to raise awareness for the museum and its program offerings throughout the community.

Northwestern Mutual’s annual program recognizes 16 financial professionals who demonstrate exemplary volunteer service through donations to benefit their nonprofits of choice. Through this year’s program, nearly $300,000 has been donated.