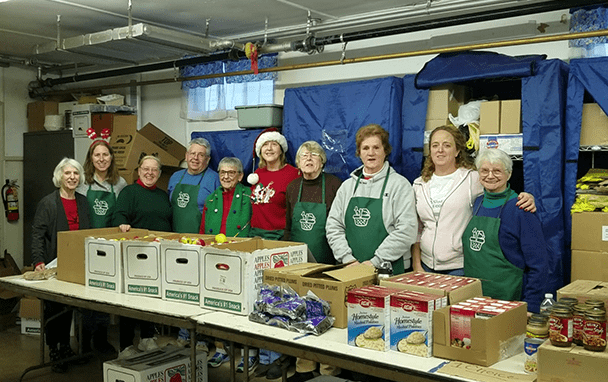 Some years ago, Lauren Hayward, and her late husband Ken, offered to put a coin jar on the counter of their village deli to raise money for the Sloatsburg Food Pantry. It may have seemed like a small gesture but in 2018, donations in the jar added up to more than $15,500, or 27% of the $57,538 raised.

A coin jar. A food drive. The use of a refrigerator. Selling eggs at cost. These, and many more, are the ways in which Sloatsburg-area businesses and beyond embrace a nonprofit that works to support the most vulnerable citizens in Sloatsburg, as well as Suffern, Hillburn, Airmont and Tuxedo.

“She continuously collects the bills and empties the coin jar for us to pick up.”

“It’s not just that the coin jar is on the counter,” said Susan Meyer, the pantry’s director. “She continuously collects the bills and empties the coin jar for us to pick up.”

The pantry’s relationship with Hayward Deli & Market began a decade ago when the deli offered milk at cost. Today, the pantry purchases 30 cases of milk a month at cost. The deli also is the drop-off site for Thanksgiving and Christmas turkeys, and it offers the pantry refrigerator space year-round.

“The generosity in our small town businesses amazes me,” Meyer said.

Businesses, as most nonprofits know, are the backbone of a community. The Sloatsburg Pantry in 2018 served more than 80,000 meals, or 8,000 pounds of food per month including meat and fish, eggs, milk, bread, and produce, to nearly 9,000 people. While 182 people signed up anew, the overall client rate declined by 4%.

Last year, $700 was raised for the pantry on Dine To Donate nights at Characters Restaurant & Bar and Sunnyside’s Bar & Grill. Haas Pharmacy also has a coin jar. Both ACME and ShopRite allow the pantry to hold food drives outside their front doors.

Canned or packaged foods are desired donations, Meyer says, but “The number one thing we need is money.”

The pantry, which is open twice a month at the Sloatsburg United Methodist Church, provides each client with nine meals per visit. The nonprofit has 30 volunteers that help with purchase and packing food, car carryout for clients and referral of additional social services.

UPS, and more recently employees from Warby Parker, have sent volunteers to work at the pantry.

Accountants Stevens & Sweet Financial of Tuxedo donates time to do the pantry’s books. Meyer, who works part-time, draws a salary of about $6,000.

“We are a grassroots food pantry, run by kindness and great energy,” said Joyce Donohue, a pantry volunteer. “We’re grateful for what we get but need more support from local businesses. We don’t have the manpower to go out and solicit it.”

Both Meyer and Donohue say food insecurity is a hidden ill in our society.

“You could be standing next to someone and you have no idea that they can’t feed their children,” said Donohue. Roughly 34% percent of the meals the pantry donates feed children.

There are more than 40 food pantries in Rockland County.