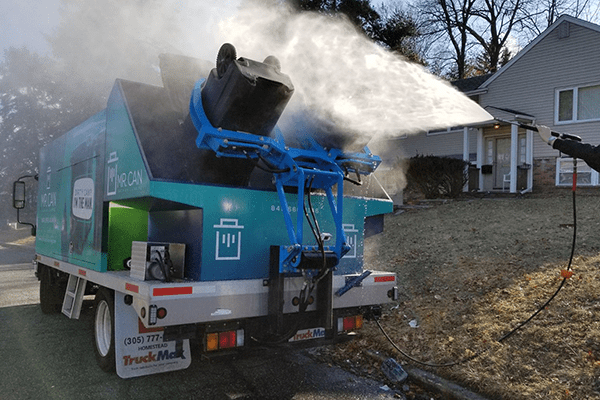 Many small business ideas sprout from a single question: If only there was a product to do this…

In Shimon Fleischman’s case, the question pertained to a method for cleaning residential garbage bins. This flashbulb of an idea occurred to him one day a couple of years ago when he was helping his brother Gershon, move into a new house. The pair bemoaned the chore of having to sanitize filthy receptacles. So Fleischman did what most people do when they hope there’s a solution to a problem. He Googled.

What he found was John Conway, the innovator of the Doral, Florida-based Sparkling Bins — the first and largest trash bin cleaning industry nationwide. The company manufactures a specialized, environmentally-friendly truck that is designed to clean curbside trash and recycle bins.

Fleischman, who sells insurance, approached his brother, who sell electronics, about starting up a similar business. It took a bit of tugging to nudge his brother – and the pair have kept their day jobs on scaled back schedules – but they moved forward and started Mr. Can Inc. They bought a custom-made truck from Sparkling Bins (it took six weeks to arrive) for $115,000. The truck lifts and rotates the bins over a patent-designed pressure-washing mechanism that uses 190 degree water. The pressure head rotates at high speed, blasting debris off the container. Similar to power-washing a deck. The technology uses a specially-formulated green cleaning solution to remove 99% of common bacteria. The bins are cleaned, sanitized, deodorized and disinfected.

Founded a year ago, Mr. Can is the first New York outfit to offer curbside bin cleaning. As everyone knows, town waste pickup services do not clean bins. In fact, frequently remnants of detritus are left to fester in cans. Garbage bins are a toxic soup of bacteria and germs, including salmonella, E. coli, yeast, mold. You get the idea.

it doesn’t occur to home owners that there’s a professional service out there to do this chore.

I have not taken a survey but I’m not sure how many people clean their garbage bins, and when they do, inevitably they use bleach and other harsh chemicals that run off into the water system. Compared to mowing the lawn or washing the car, I imagine trash-bin cleaning remains on the “honey-do” list for quite a while.

Nevertheless, it doesn’t occur to home owners that there’s a professional service out there to do this chore. The Fleischman brothers hope to change that. Mr. Can has been advertising the service online, in social media and going door to door. Word of mouth, particularly in the Jewish community, has been the best way to spread the fever. Of course everyone accumulates garbage, but larger families with many children tend to have a greater buildup and have been receptive to the concept. And, it is Fleischman’s community.

The colorful, 22-foot long truck, which should have a life span of about ten years, pulls up in front of houses on the curb. Two cans can be cleaned in three to five minutes. Mr. Can do around 80 runs per truck daily. Residents can pay a one-time fee of $25, or sign up for biweekly ($10), or monthly ($12) service.

Mr. Can has been growing its roster of clients. The company plans to expand to Orange County, and eventually to Westchester and Bergen counties. Fleischman is eyeing the possibility of two or three new trucks. For now, the main setback is awaiting permits to allow waste water to flow into the sewer system, rather than having to cart away the dirty water that is collected in the truck. “It costs a lot, and it’s not effective.”

Fleischman knows he’s chosen a business that is both innovative yet not necessarily top of mind, which will continue to put pressure on him to get out there and educate people. But his cool aqua-green truck with the words “Dirty Can. I’m The Man” is essentially a moving advertisement that is likely to catch the eye of any homeowner who dreads this chore.