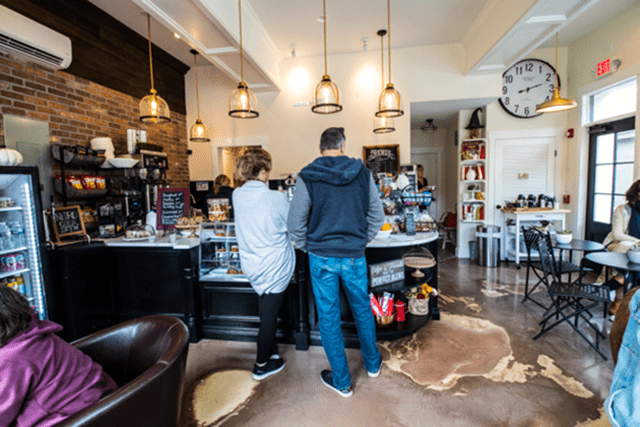 Let me be honest. I was not expecting to catch a Brooklyn vibe in Sloatsburg when I parked outside The Village Blend one recent autumn day. But there it was inside the fire-red Colonial building across from the NJ Transit train tracks in the Commuter Parking Lot: fabulous design, impressive coffee, and a mix of homemade and New York City-imported Balthazar pastries under glass.

You’ve heard of the Oprah bump. The Shark Tank bump. Call this the Bruno bump. Former tech titan-turned-developer Michael Bruno, who is in the process of expanding Valley Rock Inn & Mountain Club, a unique pleasure destination that includes a 17-room inn, restaurant, bar, market, and gym, is giving small businesses the confidence to gentrify Sloatsburg.

Barbara Berntsen dreamed of opening a coffee shop in Sloatsburg for 15 years. The Village Blend is housed in a section of the two-building complex Berntsen, and her daughter Nicole Scanlon, co-own. The larger building on Route 17 houses the hair salon Rococo’s and two offices. The mother-and-daughter team run their construction company All American Drywall in the upstairs portion of the smaller building behind Rococo’s. The 700-square-foot lower level used to be a garage.

After a long, trying six-month, six-figure reformation that included both interior and exterior work, The Village Blend was born. The shop serves BonJo coffee, a medium smooth Central American blend from the Connecticut roaster. A cup of coffee is $2.50 for a large, $2 for regular. Croissants, muffins, crumb cake and bagels from Bagel Train in Suffern were on offer the day I was there. A steady flow of hikers, bikers, day trippers and locals streamed into The Village Blend. The mix of pendant lighting, woods and leather create a relaxed atmosphere. The re-polished, buffed, and coated concrete floor looks like a cowhide – a happy design accident.

The hipster coffee shop, owned by Berntsen, Scanlon, and designer/artist Cindy Sass Garcia, is a collaboration among Sloatsburg locals who are reading the tea leaves.

“It’s been slow but Sloatsburg is ready for revitalization,” said Berntsen, who is also president of the Sloatsburg Chamber of Commerce (which is also in the process of rebooting after going dormant).

Only within the past two years has Sloatsburg, population 3,100, hooked up sewer. Talks are underway to upgrade and beautify sidewalks, walkways, streetscapes. But Bruno’s Valley Rock Inn, opened this summer, has already begun to draw New York City hipsters, as well as Hudson Valley and tri-state area folks, who are seeking upscale amenities at the foothills of Harriman State Park and its 70,000 forever wild acres. Ramapo Woodmont Hills Apartments, a 384-rental complex on Route 17 near Auntie El’s Farm Stand, is underway. Also, the nearby development Tuxedo Farms, with 2,000 townhouses, cottages, apartments and estates, will be a boon to Sloatsburg.

Bruno’s urban oasis began two years ago with the purchase of an old barn he transformed into a market, the Blue Barn Farm Stand. Then he bought another building, and another until a seedling of an idea morphed into a $6 million purchase of 15 acres with a dozen buildings. Four have been restored to create an inn, and plans are still being created for at least a half dozen more historic structures, which the entrepreneur is likely to rehab. Bruno says the year-round restaurant will open in January. Plans for Valley Rock Inn include an art gallery, antiques shop, bike shop and an events space.

One thing Valley Rock Inn won’t need is a coffee shop because the Village Blend is right at the property’s doorstep.

The coffee shop owners hope to recoup their initial investment within two years. The NJ Transit stop outside their doorstep is not very busy with weekly commuters but the owners expect a blend of locals and weekend foot traffic to fuel their success. “We have a lot of people who run small businesses working from home and a lot of artists and craftsman,” said Berntsen. “A lot of young families are moving up here. The need is here, and now’s the right time.”

Read also, Nyack Restaurateur at a Fork in the Road