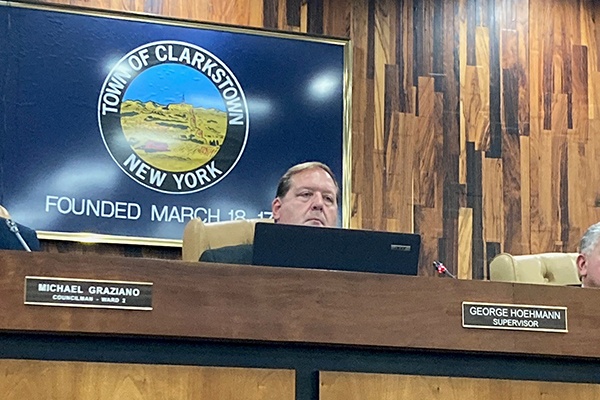 Questions linger over whether the Town of Clarkstown council can defend itself without outside counsel from a lawsuit brought by the Town Supervisor George Hoehmann and Councilman Don Franchino to do away with term limits. The suit claims the law enacted in 2014 is faulty because it relied on a supermajority vote, which should have been passed by a voter referendum.

Both Councilmen Frank Borelli and Patrick Carroll argued it is necessary to hire outside counsel to defend the town because the town’s attorney Craig Johns works at the pleasure of the Supervisor and is appointed by town councilmembers. Both Borelli and Carroll emphasized that while Johns and his staff have integrity and legal expertise, they cannot represent the town because they have a conflict of interest. An objective legal team is needed to “avoid the appearance of impropriety,” said Carroll.

The board also voted 3-2 to repeal the term limit law but as it’s written, the law needs a supermajority (at least four of the five council votes) to be repealed. However, the 3-2 vote to repeal may not hold, and the decision on the validity of the law will likely be decided by a court.

In a marathon board meeting that turned raucous and unruly at times, board members showed a division rarely seen in the town. In contrast to Carroll and Borelli, Councilman Michael Graziano was satisfied to have Johns and his team defend the lawsuit that was filed in late December in Rockland County Supreme Court alleging the town’s 2014 term limits law is illegal.

Clarkstown’s term limit law only allows for repeal by a super-majority of the board — that is a majority plus one vote. As written, to repeal the term limit law would require four votes. The current law was passed eight years ago by a unanimous vote of the town board. Hoehmann championed the law and voted affirmatively for term limits at the time.

After the board voted on hiring outside counsel, with the lawsuit plaintiffs recusing themselves, it remained unclear whether the 2-1 vote in favor allowed the board to follow through with seeking to hire an attorney. Johns raised the notion that the council required all three non-recused members to vote in favor, citing a town law that says a majority vote of the whole board is needed. This would mean that three of the five council members would have had to vote affirmatively even though two recused themselves. Carroll countered with a different opinion, citing a state law that says only a simple majority of those voting is necessary.

While the unsettled question hung in the air, Clarkstown residents in a packed chamber scolded the Supervisor for bringing the suit, “for suing the taxpayers,” for undertaking what they said was a hypocritical power grab on the eve of being term-limited and ineligible to run again for office. They lambasted him for retreating on the issue in late November and again in December, while filing the lawsuit the week of Christmas and the holidays. They accused him of eroding democracy and prolonging the agony of an issue that many believed was already settled when Hoehmann previously stated publicly that he was ready to move on.

The vitriol in the room was palpable, with residents saying bringing the suit against the town was “insane,” especially the notion of being prevented from hiring outside counsel to defend the town.

Many invoked Hoehmann’s own words from 2014, including quoting President Teddy Roosevelt, who believed that political careers needed shelf lives. While some residents conceded that the Supervisor has done a good job steering the town, nearly every speaker railed against his tactics to hold onto power.

“This is like the Twilight Zone,” said former council member Pete Bradley, who praised Hoehmann for the job he’s doing but said this was a “boo-boo.” He told the Supervisor that suing the town is already damaging his reputation and urged him to drop the suit and move forward.

One after another, residents accused Hoehmann of being unwilling to give up on the job he has held for eight years. Hoehmann cannot run for another term in 2023 if the law remains in effect, forcing him out of elected office. Franchino is not term-limited in 2023.

For months, Hoehmann, assisted by town attorney Johns, toyed with trying to get rid of term limits by claiming the language of the law was vague.

But in a fresh turn, the suit alleges the law should be voided because residents “never had the opportunity to decide the issue at a public vote.” Plaintiffs are essentially saying that the term limit law was not valid because it was not passed by a public referendum and contains a provision for repeal only by super-majority.

To support their claims, plaintiffs argue that because New York law requires that every “act, motion or resolution” be passed by a majority of all of the members of the Town Board, and that imposing a requirement for a super-majority to repeal the law “curtails the voting power of elective officers” to pass laws by simple majorities. Public referendums are required whenever a local law, “abolishes, transfers or curtails any power of an elective officer.”  The suit is essentially arguing that because the law only allows for repeal by super-majority and was passed without a public referendum, it is illegal.

Supporting Hoehmann’s legal theory is a case from the Appellate Division of the Supreme Court of New York, Fourth Department, which says, “A local legislative body lacks the power to enact legislation curtailing the voting powers of its own members; such legislation cannot be enacted except by referendum.”

In essence, Hoehmann’s suit alleges that super-majority votes are illegal unless passed by referendum. Clarkstown uses super-majorities in other laws, including increasing the number of housing units in both the AAR (Active Adult Resident) zone and the newly formed TOD (Transit Oriented Development) zone in Nanuet.

In the wake of the contentious meeting, both Carroll and Borelli said they were prepared to hire Attorney Daniel Szalkiewicz of Manhattan to defend the town. The cost to hire outside counsel would not exceed $12,500, said Carroll. But Johns said the matter remains unsettled until further research is completed on whether the 2-1 vote stands.

“We need to defend the town,” said Borelli. “We will do that one way or another.”