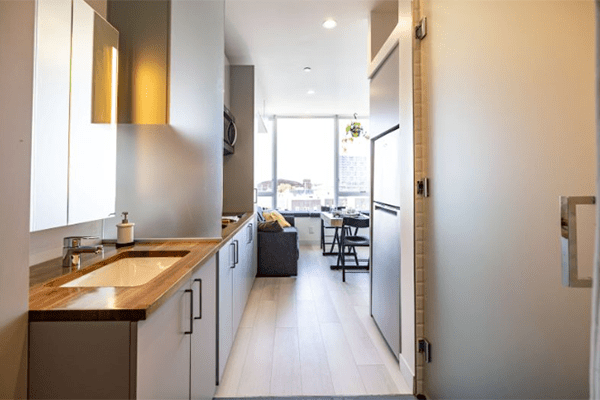 Newark Hotel To Be Transformed To Micro Apartments; 67 Micro Units Planned In Newburgh

Nearly a decade ago, InterContinental Hotels Group opened the 108-room Hotel Indigo Newark Downtown in a historic former bank building at 810 Broad Street. The notion of a boutique hotel was hopeful, but it didn’t survive. What it left behind was a space for another developer to experiment with a different trendy concept.

Indigo Residences, as the 106-unit project will be known, will likely be Newark’s first micro-apartment building.

“We weren’t looking to build micro-apartments when we purchased the building,” said Avi Benamu, managing partner of an affiliate of Manhattan-based Winchester Equities. “We found a good building right in the heart of central Newark, close to transport, entertainment, and work centers. We’re not big players in commercial, office or hotel development — we’re more comfortable with residential.”

Redeveloping the building with one- and two-bedroom units at first seemed the obvious way to go. But then the developers took a page from Brooklyn-based co-living projects in Bushwick and Bedford Stuyvesant that offer young professionals furnished apartments and shared facilities that are more affordable than typical studios or one-bedrooms.

“The trend in housing for millennials and young professionals is shifting to urban areas, smaller spaces, walkability and shared amenities,” said Benamu, whose firm is slated to complete the project around year-end.

Micro-apartments, which are typically less than 450 square feet, are not new to Asian capitals or even large cities like New York. Carmel Place at 335 East 27th St. became New York City’s first apartment building devoted exclusively to micro-units in 2015 with 55 micro apartments ranging in size from 260 to 360 square feet — half the size of a typical studio — and shared amenities, setting a new standard for micro-living. The project has been watched closely as a new housing prototype in urban centers and for its groundbreaking use of modular construction.

Increasingly, the concept is migrating to smaller cities such as Newark and Jersey City, and the City of Newburgh in the Hudson Valley, as young professionals are continuously squeezed out of an increasingly prohibitive rental market where studios in Manhattan rent for up to $3,500 monthly.

Plans to expand Newburgh’s housing stock are underway in two projects on the city’s densely populated East End, with 67 micro-units planned for housing developments at 17 and 19 Johnston St. and 143 Washington St.

Not to be confused with single room occupancy units, which are illegal in Newburgh, the micro-units will be 500-square-foot, self-contained apartments with a kitchenette and a bathroom, similar to a studio apartment. It could be more than a year before they are available.

A micro-apartment is a single living space with a small kitchen, bedroom and bathroom — in essence, a smaller version of a studio apartment. Think of how a tiny house or a boat’s living quarters are designed — sleek, functional and clever. Good design is at the heart of micro-apartments geared for single occupants.

The pioneer developers of Nest Micro Apartments on Academy Street in Jersey City, the state’s first, say the ground-up construction of 122 furnished studio units that opened in August 2018 is fully leased. Average rents have increased from $1,500 to $1,725 monthly — compared to average studio rentals of $2,700 a month. Smart design and transformable furniture maximize every inch of space, which creates homes that function like those twice the size. Residents have access to amenities such as a coffee lounge, on-site laundry facilities, storage units, a gym and others.

“We’re chasing two other deals because tenants love it,” said Keith Schwebel, CEO of KSNY. “The financial equation works because, even though you’re charging less per unit, you’re getting more dollars per square foot.”

Reading the tea leaves, Winchester plans to renovate 810 Broad St. with the help of a $21.5 million loan from Parkview Financial. The project at the 13-story, 90,000-square-foot structure across from the Prudential Center will include 98 micro-studios measuring around 360 square feet and eight one-bedroom units ranging from 664 to 695 square feet. Twenty-two units will be slated for low-income housing.

The Newark project has attracted New Brunswick-based Delta’s restaurant to open an eatery on both the ground floor and for rooftop service.

810 Broad St. was built in 1912 as the headquarters of First National State Bank and was designed by Cass Gilbert, who also designed the U.S. Supreme Court building in Washington D.C. and the Woolworth Building in New York City. In 2014, the building underwent a $29 million renovation by the Hanini Group to convert the property to a hotel.

After Winchester bought the building, the development team was at an inflection point. They knew they wanted to convert to residential, but a gut renovation would have cost more and taken longer, especially with supply chain challenges and building material shortages.

“To knock down the walls, especially with the cost of construction today, would have meant spending more on construction and we would have had bigger but fewer apartments,” Benamu said. “We looked at a more specific demographic based on research and what we were seeing with co-living. The younger workforce is flexible. They know what good design looks like. They want amenities, interactions, experiences. With 810, we can include a movie screening room, conference room, room service — like a hotel — Amazon lockers, juice bar, café.”

Indigo Residences will offer 12-month leases to begin from $2,100 to $2,800 monthly. Affordable units will start at $1,400 monthly. In addition to targeting millennials looking for smart living at affordable rents, Benamu said his company will market the units to large organizations like Prudential Center to have apartments available for its workforce. And if the model works, it will be replicated.

“This model lends itself to urban centers like Newark, which is attracting more and more young professionals,” Benamu said. “More people want to live like this. They’re looking for affordability, everything all in. All they need is a suitcase and a toothbrush to move in.”

The original version of this story appeared on RE-NJ.com and in the Winter 2022 issue of Real Estate NJ