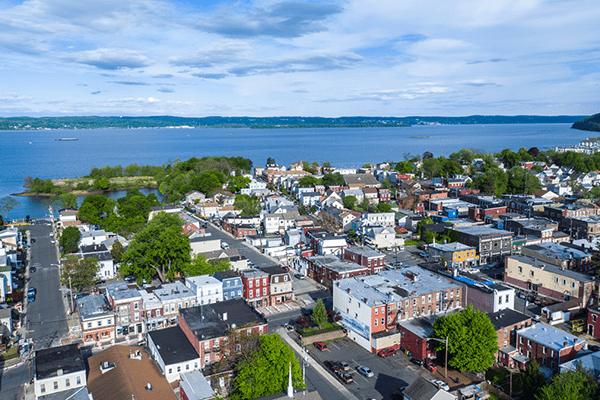 The Village of Haverstraw is marching ahead with goals it laid out in its recently updated Comprehensive Plan, a roadmap for the municipality’s future in terms of zoning, planning, economic development, climate change, and more.

“The more contiguous and scenic access to the river, the more people you bring to town,” said Kohut.

The Comprehensive Plan, last updated two decades ago, was adopted in July.

Both ambitious and progressive, the work is the recipient of the 2022 Heissenbuttel Award for Planning Excellence from the New York Planning Federation. The annual accolade is given to an individual, municipality, or agency for outstanding accomplishment in the planning field; it is named in honor of Henry Heissenbuttel, the former director of the Dutchess County Planning Department.

“Overall, we are trying to make a more sustainable downtown that’s diverse, vibrant, walkable and at the same time meets the needs of retailers,” said Mayor Michael Kohut. “We’ve also focused throughout the plan on climate change and sustainability because we have a long coastline.”

The Village is making strides in one of its top goals: redeveloping the former Chair Factory site.

“We have signed a Master Development Agreement with MPact,” said Kohut, referring to the chosen developer for the nine-acre site. “We’re just beginning to move forward with SEQRA (State Environmental Quality Review Act) and due diligence and site plans. We’re very optimistic about this development.”

In February, the Village named the Huntington Station, Long Island-based MPact Haverstraw LLC the lead agent in a redevelopment team that proposes a mixed-use project that includes market rate and affordable housing, retail, commercial, and a hotel for the vacant nine-acre Hudson River peninsula.

MPact has partnered with a team of affordable housing developers, engineers, architects, and consultants who envision a pedestrian-oriented hub that will include a 150-room hotel, 430 housing units, 14,000-square-feet of retail that connects with Allison Avenue, and green spaces lacing the perimeter of the site to make the Hudson River accessible for kayaking and boating and build in protection for climate change flooding.

The Comprehensive Plan targets redevelopment of the waterfront site as a catalyst for economic growth and vitality but at the same time the project will be built “as far from the water’s edge and will be elevated” to protect the coastline and mitigate flooding, according to Kohut.

The mayor also said the Chair Factory site will be one of the greenest projects in the Hudson Valley, with solar or geothermal energy and “tight building envelopes” that are energy efficient.

The village released a Request for Expression of Interest (RFEI) for development of two waterfront parcels known as the Chair Factory and Damiani Properties last July. The parcels sit on a peninsula at the foot of Main Street at the widest point of the Hudson River with views of High Tor Mountain, Westchester, and Bowline Point Park.

With forward momentum, the environmental reviews and site plan could be completed within 18 months, with groundbreaking beginning in two years. Kohut said it would likely take between three to five years for a full buildout.

The plan also encourages “in-filling” and allows for taller buildings downtown because the Village is out of open land.

“We are not afraid of development,” said the mayor. “Virtually every lot is built – but not to highest and best use. We can’t grow if we can’t expand our tax base.”

The Village’s Comprehensive Plan lays out plans to designate a handful of historical buildings such as Kings Daughter’s Library and the Central Presbyterian Church, as well as some of the mansions along First Street. To date, none of the village’s 19th century buildings are on the historic register.

The comprehensive plan also calls for filling in the missing pieces of a walkway trail that runs from Nyack to Dutch Town and down West Street. The idea is to snake the path through the Chair Factory site to Bowline Road and north along Beach Bread to West Haverstraw and Stony Point.

“The more contiguous and scenic access to the river, the more people you bring to town,” said Kohut.

And the Comprehensive Plan’s aspirational goals also focus on Hudson River transport, specifically on reviving weekend ferry service from Haverstraw to Ossining. Both the village and Ossining are working jointly with MetroNorth on a pilot plan that could put ferry boats back on the water either in the spring of 2023 or 2024 in time for a newly built restaurant at the Harbors at Haverstraw.