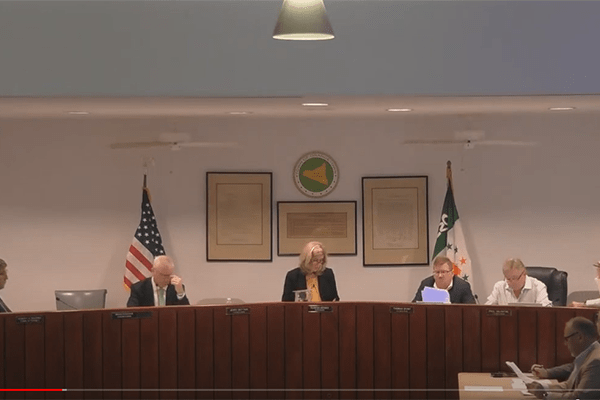 Town Has Waited Long Enough For HNA To Sign Agreement With REVEIL, The Development Team Tapped By Town To Redevelop Site

The Town of Orangetown has said enough is enough with the HNA property, deciding it’s time to take the first steps to acquire the 106-acre parcel on Route 9W through eminent domain.

The town late last month passed a resolution that authorized the board to begin eminent domain proceedings at 334 Route 9W for the HNA Training Center, which had been used as a hotel and conference center for several decades.

“I told them a year ago that condemnation is the only way to go,” said Billy Procida.

“The town is prepared to take action to do what we were trying to avoid,” said Town Supervisor Teresa Kenny. “HNA still has not signed an agreement with the chosen developer despite the fact that they’ve complied and done everything that’s been asked of them.”

Kenny said the property is in disrepair.

“We are starting the process, if need be, to do eminent domain,” the Supervisor said. “There is still an outside chance they will sign the agreement.”

It’s been nearly two years since the town initiated an effort to take a role in steering the destiny of the prized property. The Palisades hotel and conference center was purchased by HNA Training Center NY LLC for $60 million in 2016 from IBM. It has been vacant for five years.

In its resolution, the town writes “The Town of Orangetown has a vision for maximizing, revitalizing and redeveloping the currently underutilized and vacant property for the benefit of the community with a use that will have the public purpose of enhancing the sound growth of the town, increasing its tax base, preserving key environmental on-site features, providing public amenities and uses and encouraging good design standards.”

While eminent domain has been used to foster commercial redevelopment for the public good, such a tool is not without its challenges. The process of eminent domain is costly and time consuming.  According to the New York State Attorney General’s Office, the acquisition of property occurs only after an extensive engineering process that includes a series of planning and design phases to determination that the property is “necessary for public improvement.” Prior to acquisition, the condemnor, in this case the town, must conduct a public hearing to review the public use to be served by proposed acquisition and the environmental impact. At the end of the process, the government must pay fair market value for the condemned property, which could be millions of taxpayer dollars. HNA would have a right to contest the fair market value in court.

If the town condemns the property, REVEIL would not be bound by the contract it negotiated with HNA, but the developer would have the option to participate in the project going forward.

“I told them a year ago that condemnation is the only way to go,” said Billy Procida, who was one of the developers who bid unsuccessfully for the project. “I congratulate Teresa Kenny in making the right decision and I’ve offered my help to assist in any way that is needed to help the community.”

In June 2021, REVEIL LLC, a Delaware Limited Liability Company, was tapped to buy and transform the property and update the 206-room hotel and conference center built in 1986 to include restaurants and a spa. The plan also calls for converting conference space into production studios. The company is said to be in contract to purchase HNA for $33 million, according to its capital request obtained by RCBJ last June.

REVEIL posted a $200,000 deposit when it sent the town its “Letter of Intent,” to buy the property. On Oct. 7, 2022, the developer executed the PSA and delivered signature pages to its counsel to hold pending execution by HNA. The team posted an additional $400,000 deposit with an escrow agent for the purchase.

The town inserted itself into the process of bringing a buyer to the table after a $40 million deal between HNA and a Brooklyn buyer fell through three years ago. The previous buyer left an $8 million down payment behind after unsuccessful litigation. However, ZVG @ Palisades LLC, which represents the failed buyer, has filed a lawsuit to force HNA to close on the $40 million contract that HNA says ZVG defaulted on in 2020.

ZVG claims that HNA sabotaged the sale in 2019 by refusing access to the property when ZVG’s financing depended on an updated appraisal. ZVG claims that HNA’s interference with the contract caused ZVG’s default, and the HNA should not benefit from its own wrongdoing.

HNA asked the Court to dismiss the case back in July, saying that ZVG had several chances to close, was given several extensions and ultimately couldn’t come up with the money to buy the property.

The case is pending.

On top of this, a federal judge in New York has said that HNA Group, at least temporarily, cannot transfer the proceeds of any assets (or an interest in an asset) that HNA owns including any from the sale of the Palisades Conference Center.

SL Green charges that HNA’s “indirect” ownership could still result in HNA Group receiving the proceeds of the sale, even if it is not the record owner of the real property.

The case arose from effort of an affiliate of SL Green, the Manhattan-based REIT, to confirm an arbitration award it secured for $185 million against HNA Group (International) Company Ltd.

SL Green sought an order attaching all property of HNA, including the proceeds of any sale of the Palisades Premier Conference Center to satisfy, at least in part, the final arbitration award against HNA. SL Green also sought an order requiring HNA to provide 14 days advance notice to it of any sale of any property owned directly or indirectly by HNA. HNA’s counsel are seeking court permission to withdraw from the case based on HNA’s refusal to communicate, cooperate, and pay legal fees, according to a court filing in the federal litigation.