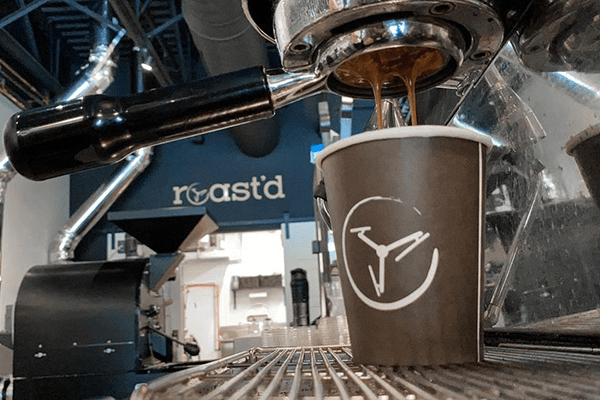 After working in the high-pressure world of finance and in a myriad of other jobs, Ethan Chang dedicated himself to missionary work at orphanages in South Korea and India. While working overseas, Chang often felt homesick. His go-to salve was a good cup of coffee.

It is the great common denominator, Chang says. A way to connect with people no matter what corner of the globe you’re in and no matter who you encounter.

In mid-November, after a somewhat peripatetic life over the past several years, Chang, a born entrepreneur, will open Roast’d Coffee at The Shops At Nanuet. Born in South Korea but raised in Argentina and New City, the world traveler is hoping to create a hub of community at an independently run coffee café that roasts on site. Roast’d Coffee is taking over the space that Starbucks had leased.

The Nanuet location will be Roast’d’s first Rockland County outpost, joining three other New Jersey locations. Chang says the coffee shops are not a chain nor are they a franchise but that the four are linked together through a partnership that supports one another.

“Our mission is to serve the freshest cup of coffee,” said Chang, adding that the partners source beans from all over the world and roast them in small batches. “For every cup, we measure the beans precisely, grind them fresh, and then individually brew the cup to order.”

Roast’d is one of seven new tenants that has either opened or is in the process of debuting at The Shops after a long spell of closures at the mall. Buffalo Wild Wings has relocated from the Palisades Center and has landed at the former Zinburger location. Also coming on the food front is Sombrero, a family business that started as a food truck, has locations in Totowa, Clifton, and Ridgewood. Fidelity Investments is replacing the long-vacant Bonefish Grill. Three home furnishing stores round out the newcomers.

“I started tinkering with the idea of a coffee shop about four years ago,” said Chang. “I googled barista and roasters in Fort Lee, where I live, and that’s how I connected with Rumie and worked as a roaster at that location for a year.”

Chang said his search for a location originally focused on Nyack for its downtown and hipster vibe, but it was difficult to find a location that could accommodate a roaster because it needs to be vented through the roof.  While scouring for a spot, he got a surprise call from a Simon Malls broker who had been to the Franklin Lakes location and was interested in wooing Chang to The Shops at Nanuet.

“We had a good negotiation,” said Chang. “They were willing to help us out in the beginning stages. We’re not a triple AAA business. They wanted us there. They showed interest in us. We have signed a five-year lease with an exclusive clause for a coffee shop.”

Chang brings a pastiche of experience to this next chapter of his life after working in finance and investments, traveling the world to do missionary work, odd jobs in hospitality, fine dining, and construction. Nearly 40, the entrepreneur, said missionary life has taught him some basic tenets that he hopes will serve him well: one should pursue something you truly want to do, risk is always a factor, and patience is truly a virtue.

“I don’t have an NGO (non-governmental organization) but it was like I was running one overseas,” he said. “I got a glimpse of what it’s like to manage a lot of people, to have a goal and a vision, to accomplish tasks, to grow.”

The Roast’d group embodies Chang’s ethos. The company website says, “We are dedicated to contributing to our community, helping local businesses, and promoting clean eating.” The shops roast eight to ten varieties of single origin coffees in small batches. Chang says engagement and conversation with customers is what builds loyalty. A cup of coffee costs between $3.50 and $4. The coffee shop, which plans to have about six employees, will also serve pastries.

For Chang, Roast’d coffee is about being around others who are passionate about the art and science of coffee. More simply, he says, “everyone deserves a good cup of coffee.”