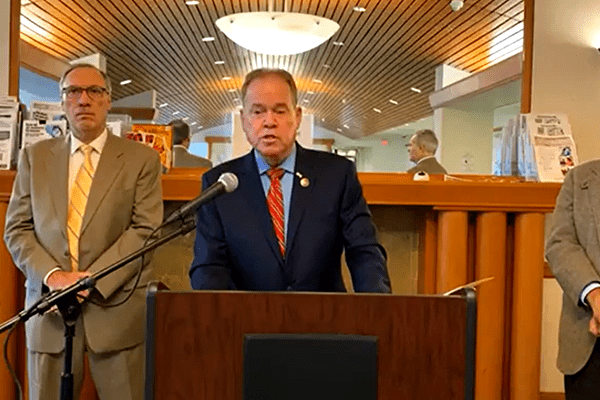 Proposed 2023 Budget Eliminates Some Positions; Adds Others To Shore Up County Operations, Health, and Safety Departments

County residents can breathe a little easier today knowing that Rockland County is proposing a $812 million 2023 county budget that does not raise taxes.

“For the 2nd year in a row, I am recommending no increase in property taxes,” said County Executive Ed Day during a press conference on Monday.

“This proposed budget also has no layoffs or program cuts, all thanks to our years of conservative spending and budgeting, maximizing every single tax dollar spent by this county,” he added.

The Budget also proposes the elimination of 15 county jobs but the addition of 43 positions to shore up operations, health, and safety.

Being fiscally conservative, Day says, has “aided us in digging Rockland out of a $138-million deficit in 2014 to our current surplus. But just as our families are facing financial challenges, so is County government, which is why we are continuing to be cautionary with this surplus to shield ourselves from any crisis that is thrown at us – including a recession.”

However, the county executive did not reveal the anticipated surplus. There was a $92-million at the end of 2020. “We hope to have 2021’s audit next month,” said a county spokesperson.

The county executive says an economic cushion is insurance for the future.

“In these turbulent economic times, our rainy-day fund will be crucial to protecting residents from future tax increases,” said Day. “With borrowing interest rates skyrocketing, our Commissioner of Finance even indicated the likely need to utilize that surplus to pay for 2023 capital projects, saving additional taxpayer money.”

Day acknowledged the county is still struggling to mitigate the unexpected health and economic consequences brought on by the COVID pandemic in 2020, and more recently a 40-year high inflation rate and the temporary spell of skyrocketing gas prices. Gas prices have dropped again to pre-COVID levels, for now.

Day also touts the county’s move to cap the county’s sales tax on motor fuel purchases at $2 through February of 2023. “We coupled this with New York State’s sales tax suspension, saving drivers roughly $5 for a 20-gallon fill-up,” he said.

The county executive also said Rockland is introducing legislation to opt into the state’s new bill that increases the income eligibility for seniors seeking a reduction in property taxes from $29,000 to $50,000 for people 65 and older.

The county executive said his staff is working to distribute “every single penny of the $63 million in federal funding we received under the American Rescue Plan,” dispersing more than a million dollars in grants to small businesses and restaurants, as well as nearly $10 million to municipalities and nonprofits for green spaces.

Day plans to propose the addition of 43 positions.

A key new position is a Commissioner of General Services to oversee operations and coordination across Purchasing, Facilities, Capital Projects and Information and Communication Systems. The county is also proposing to hire a County FOIL specialist.

“Transparency not only strengthens our democracy but also ensures government accountability. I truly believe Rockland deserves and needs this designated officer to oversee any, and all, Freedom of Information Requests we receive in this County,” said Day.

Other new positions being proposed are aimed at strengthening departments including the Department of Health, Environmental Resources which oversees our parks, and Department of Mental Health.

Rockland County’s Department of Health has been challenged in a short span of time with three health emergencies: measles, COVID, and now polio. “It is clear, this department needs more boots on the ground, so we are proposing several new positions for the Department of Health,” Day added.

The budget also proposes two new positions for the Department of Mental Health, including a Psychiatric Social Worker, who will head the Suicide Prevention Coalition with veterans being a notable focus.

According to the U.S. Department of Veterans Affairs, veterans make up nearly 14 percent of the suicides in this country.

“These men and women put their lives on the line for each of us only to return and be so consumed with anxiety, depression, and PTSD, that they then take their own life here at home,” said Day. “That’s heartbreaking.”

The county is also proposing a new position for the Sheriff’s Office to assist with a new safety initiative. This county plans to have hundreds of buses equipped with stop arm cameras to assist in issuing summonses to drivers who put lives at risk.

Day also mentioned the anticipated the completion of the $40-million Highway Garage by the end of this year. “This is one of the largest projects the county has undertaken in decades,” he said, adding this project would have cost significantly more if it were bid on today but since taking office, I have refused to kick the can down the road on these necessary infrastructure projects.

By the end of 2023, Rockland will have completed nine highway and bridge capital projects totaling $30 million. Only 5 percent, or $1.5 million, comes directly from County tax dollars. The additional 95 percent is covered by state and federal funding.

When Day took office nearly eight years ago, the New York State Comptroller’s Office listed Rockland as the most fiscally stressed county in the state and its bond rating was one step above junk status.

In August of this year, Moody’s Investors Service upgraded the County’s bond ratings; Rockland is among the top fiscally strongest counties in New York State.

“We’ve literally transformed this County from worst to first in only 8 years,” said Day.

“This was the second rating upgrade this summer after Fitch Rating’s upgraded us from “a” to “a+.,” said Day. “Receiving two upgrades this summer is proof our hard work is paying off on behalf of the people of Rockland County. These upgrades show lenders the county is a low risk and enable us to secure the lowest interest rates on borrowing, saving even more money for the residents of Rockland.”