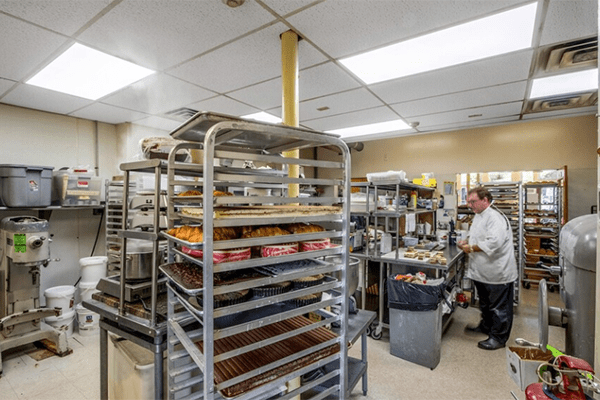 Legendary Business Owner Is Seeking The Right Buyer To Transition His Business; No Plans To Close

Word is out that Didier Dumas, the French pastry genius, has put both his business and building on Main Street in Nyack up for sale.

But let’s recall what happened when lightning struck Didier Dumas’ 1930s building at 163 Main Street in 2014; the freak accident caused a fire and subsequently an extended closure until Dumas came back, bigger and better. And now, the pastry wizard says he’s not going anywhere in the short term and will only consider a sale that keeps the bakery alive.

“I’ve put my heart into this bakery,” said Dumas, who has begun his days for years in the wee hours to satisfy a community hankering for his French treats. “I’m not closing. I want to sell the bakery the right way. To someone who will keep this place the same.”

Looking to ease out of the business because he wants to spend more time traveling and with his aging parents in Marseille, Dumas is hopeful that he will find a suitable transition. The good news is that he is leaving behind a well-trained crew that has been mentored by the pastry artist. That said, Didier vows to stay on during any transition so that the French patisserie can endure.

“He has built a family,” said Alex Vursta, the commercial real estate broker from Ellis/Sotheby’s who has listed the combined sale for $1.9 million. “His plan is to stick around for as long as it takes for the buyer to learn the business.”

Vursta said Dumas may be willing to sell the business only and keep the commercially zoned five-story building, which is likely worth around $1.2 million, based on other recent sales in Nyack. That would put the price tag for the business – a gem in the county – at around $775,000.

By most accounts, Didier Dumas has created a French oasis in Nyack that attracts patrons from the county and beyond. People come for the French pastry cakes, crepes, macarons, baguettes, sandwiches, quiche, salads, and coffee, many whiling away an hour or so at either an indoor or outdoor table.

Dumas, an artist and a humanitarian, is one of those larger-than-life characters who has left his mark through both his artistry and his participation in the community. He has baked for more charity causes that anyone can count.

“He’s a jewel in our interesting downtown of merchants and restaurants,” said Nyack Chamber of Commerce president Roger Cohen. “He stands out as a community supporter, especially for someone who has the artistry that he has.”

On a personal note, I remember when Dumas opened his doors. My family and I had recently relocated from Manhattan and Didier Dumas was a haven for an urbanite looking for a genuine French croissant and a café atmosphere that is not always easy to find in suburbia. Over many years, Dumas became a community magnet and French patisseries have sprung up around the region and nation, though none in Rockland County to rival this one.

If there is a silver lining, according to Vursta, Dumas has taken great pains to apprentice a crew of bakers who have become “like a family.”

He has created a team of “mini hims,” said Vursta, noting his baking staff started with little to no skills and has been essentially trained by a master. Dumas has nurtured and valued his talent; he feels as though a new owner can step in and benefit from a professional crew, and he has said he’s willing to share his recipes.

In part, Didier wants more freedom, after years of waking with the roosters, and to some observers, being one of the hardest working of Nyack’s denizens.

Vursta says Dumas can travel more while transitioning a new owner because of the well-oiled machine he has built in his kitchen.

“Whenever there is an emergency, everyone knows what to do,” said Vursta.

In July 2014, a lightning strike caused a fire, which did serious damage to the building. There was much sorrow over the prospect of the bakery closing for good. But after eight months, Dumas not only reopened but undertook an expansion that doubled his seating capacity inside up to 45, and he added a wine bar.

“I am willing to do whatever it takes to make sure this bakery lives on,” said Didier. “I want this to remain for my employees, my customers, the community.”