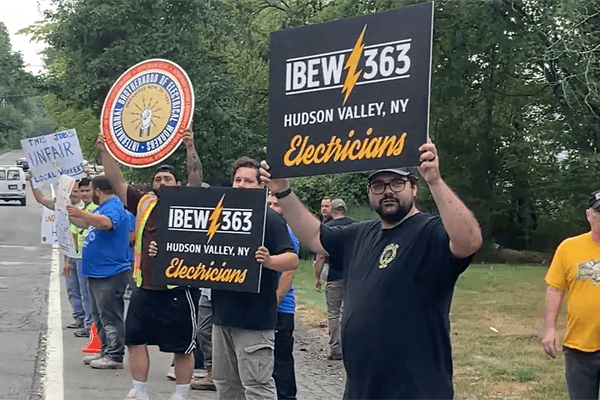 Nearly 150 members of the International Brotherhood of Electrical Workers Local 363 snaked along Route 303 in Valley Cottage on Wednesday to protest the hiring of out-of-state workers on a large warehouse project slated to be built at Executive Corporate Park.

Waving flags, pumping fists at honking motorists, and holding placards that said, “Local Jobs Gone Here” and “We Live Here, You Don’t,” electricians said they were trying to send a message to Lincoln Equities of Rutherford, NJ. The company has preliminary planning approval to build a 220,000 square-foot distribution center on 20 acres in the corporate park.

“We’re here to protect our standard of living,” said Local 363 member Don Piccinich. “We support our local businesses, we work here, we live here, we contribute to local charities. These guys come in from out of state and undercut our wages. We’re here to stop it.”

It is unclear as to whether Lincoln Equities has hired a general contractor, and whether that contractor has begun to hire subcontractors including electricians but Sam Fratto, Local 363’s business manager said he called Arco Design-Build Contractors to express interest in having local members employed.

“I called Arco, which also has a job in Orange County, and asked them about getting the bid. I was told it was gone already to a New Jersey company.”

Fratto believes the sub-contracting electrical work is being farmed out to Ocean Coast Electric in New Jersey. He believes companies like this pay nonunion workers a fraction of what union workers earn and offer little or no benefits or health plans. While he concedes private companies have the right to hire any contractor for competitive advantage, he says the unions are going to fight back and fight loud.

Loud it was as music blared and cars and trucks tooted in support for union workers.

A contender for a New York State Senate seat in November, Republican Bill Weber joined the rally to show his support.

“This is concerning,” Weber said. “We need to make sure we maintain a great caliber of labor standards, oversight and a prevailing wage,” he said. “While it’s important to balance the private sector with unions, we have to have a fair process to bid jobs. These members are just looking for a fair shot.”

Electricians who spoke to RCBJ at the rally said work opportunities have been robust. But they gathered at the rally to show their solidarity and to send a message to Lincoln Equities.

“We’re trying to protect our living wages and expenses in this area, but nonunion labor is undermining our wages and that’s not fair, “said member Rob Caputo. “These rallies are good because we are being noticed more, we have a strong voice, there are a lot of us.”

Lincoln Equities, which builds and typically re-sells leased distribution centers in New Jersey, Connecticut, and Long Island, plans to develop the Rockland County facility. Lincoln’s tenants include Amazon, UPS, and The Home Depot but they have not disclosed the prospective tenant for the Valley Cottage warehouse.

Despite a torrent of opposition from Valley Cottage residents, business owners, and the Valley Cottage Library, the Clarkstown Planning Board in June greenlighted the proposal after the developer made concessions on height, screening, and traffic studies and a map note preventing it from using the structure for a fulfillment center or parcel hub.

The board granted the applicant a negative declaration on SEQRA and preliminary site plan approval.

Additionally, Lincoln Equities has applied to the Rockland County Industrial Development Agency for mortgage tax abatement, sales tax abatement, and a pilot tax program that would give them multiple tax breaks. In that application, Lincoln calls its project a “modern warehouse facility for warehousing or distribution.” To date, Lincoln Equities has been approved for a sales tax exemption up to $2.5 million and an exemption for mortgage recording taxes totaling $388,500. They’re also negotiating with town, county, and school districts for a payment in lieu of taxes (PILOT).

The IDA is tasked with promoting employment opportunities for Rockland County, and construction jobs are vital, according to the public authority’s published labor policy.

In its application to the Rockland County IDA, Lincoln Equities consented and agreed to the Authority’s policies.

Anthony Veneziano, the attorney representing Lincoln Equities, did not respond to emails seeking comment on this story.