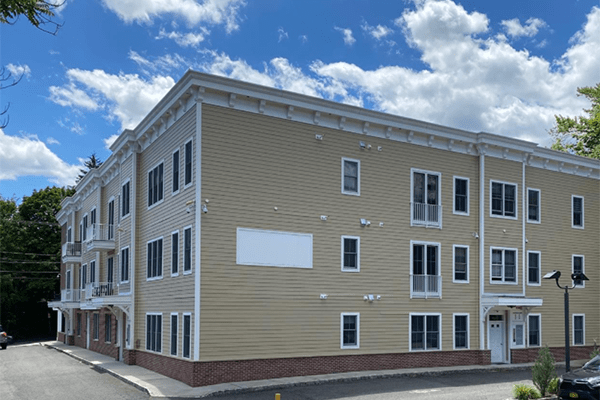 It took less than two weeks for local developer Joseph Lagana to sell two side-by-side multifamily apartment buildings on Main Street in Nyack because the market is as hot as barbeque coals.

The Glenmare, 214 Main Street and The Adare, 222 Main Street, together sold for $10.1 million to a New Jersey investor who wanted to expand into New York. The buyer, Jason Bilanin of Real Estate Growth Advisors, manages more than 1,000 apartments in New Jersey and Pennsylvania. REGA Properties, LLC, the buyer, gave a mortgage in the amount of $7,150,000 to Northfield Bank.

“The multifamily market is hot, especially Nyack,” said Michael Scrima of Redwood Realty Advisors. Scrima, along with Redwood Director Tom Gorman and Managing Partner Tom McConnell, represented both the buyer and the seller in the transaction. The seller’s asking price was $11 million.

Savvy, deep-pocketed investors are seeking investments in multi-family housing at a time when retail strips and office spaces are riskier investments. A housing shortage, particularly in Rockland County, has made multifamily housing complexes more valuable in the last few years. Additionally, investors are eager to buy now as they anticipate a rise in interest rates later this year.

“I can think of about a dozen multi-family apartment buildings that have traded in the county over the last three years, with less than a handful in Nyack,” said Scrima, whose company specializes in multifamily real estate.

In December, the “Alister Nanuet,” a 504-unit complex at 100 Avalon Gardens Drive in Clarkstown, was sold to a consortium of New York-based LLCs for $226 million according to the recorded deed at the Rockland County Clerk. The property sold by the Texas-based Mill Creek Residential Trust LLC, was purchased in Nov. 2019 for $180 million. The Texas REIT had renamed the complex from “The Peaks of Nanuet.” This is the third time in five years the property has been turned over, appreciating in value of about 50 percent over the five-year period.

And last June, Harbor Group International paid $54 million for a 169-unit apartment complex in Rockland County, amid the continued strong suburban housing market. Known as the Henry apartments, the complex was built in 2001, and is just east of Harriman State Park and just west of the Hudson River.

Lagana, who is also building another apartment complex on Main Street, constructed the Glenmare and Adare within the past seven years. There are a combined 34 units and one ground-floor retail space. Units range between 803 square feet to 1,569 square feet and rent between $1,500 to $2,800 monthly.

“There are not really enough apartments in Nyack to meet the demand,” said Scrima.

Scrima and other brokers agree multifamily properties move lightening fast, with negotiations favoring sellers due to tight inventory and high demand. Properties typically sell for $290,000 per unit, according to the broker.

“It’s a seller’s market,” said Scrima. “Sellers are demanding fast due diligence periods and no mortgage contingencies. Buyers may have 60 days to get a mortgage, but they don’t have the luxury for contingencies. They have to do their due diligence up front and line up financing.”

Last April, Scrima brokered the deal for Haven Court Apartments at 1 Haven Court in Nyack, which sold for $3.45 million. The 22-unit apartment complex had been held by the same ownership group since the 1970s.

In 2020, OT South Nyack LLC, a Monsey-based entity, bought the 72-unit rental complex at 292-302 Piermont Avenue for $19 million known as Eagle Rock Apartments. OT South Nyack LLC at 14 Aster Place is owned by Shimon Rieder and Nicole Friedman, according to the deed. Buyers consolidated the existing mortgage with a new $8.8 million loan.