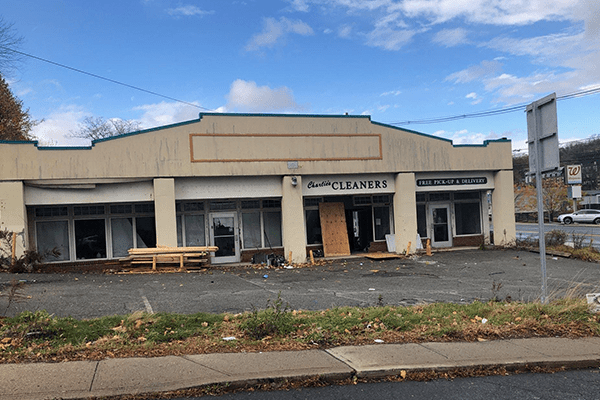 The front of the building and parking lot are strewn with garbage and construction debris. Broken windows appear to be boarded up. Portions of the building at 2 South Highland Avenue are sagging.

It’s not a good look but building owner Isaac Hershko told RCBJ he has rented the blighted space to a tile company that plans to renovate the structure and site.

“It’s rented to Nyack Tile, a tile and kitchen company that intends to use it as a showroom,” said Hershko. “We’re just waiting for O&R to hook up the electricity.”

Hershko said he’s given the new tenant six free months of rent while it invests in revitalizing the building and the property. He expects the tenant, which has signed a 10-year lease, to occupy the building by April.

The vacant property, which once housed a dry cleaner and check cashing store, is owned by 2 Highland Realty LLC, which lists its address as 88 Dutchess Blvd in Atlantic Beach, NY. The principals of the LLC own a handful of buildings in Nyack, including 65 Main Street and 20 South Broadway (The Brickhouse Food & Drink.) and the former Woolworth building.

Nyack Village officials have been frustrated over the state of disrepair at 2 South Highland Avenue but have been hamstringed because the property has been in foreclosure and New York State’s foreclosure moratorium prevents the lender from foreclosing until at least Jan. 15, 2022.

The owners had defaulted on a $3.5 million mortgage, according to a lawsuit filed by its lenders in the Supreme Court of Rockland County in March. Isaac Hershko and Dawn Ziccardi are named in the suit as guarantors for the loan on the three properties. According to public records, the case is still pending.

Both Hershko and Dawn Ziccardi are unconditional guarantors of the obligations under the loan, the suit says.

On June 23, Ziccardi filed a “Commercial Mortgagor’s Declaration of COVID-19-releated hardship,” which triggered a moratorium on foreclosure in that case until Jan. 15, 2022. In the declaration, Ziccardi says the business is experiencing financial hardship and is unable to pay the mortgage in full because of significant loss of revenue during COVID.

The legislation’s moratorium on commercial evictions and commercial foreclosure proceedings apply to small businesses with 100 or fewer employees that demonstrate a financial hardship. Tenants must submit a hardship declaration, or a document explaining the source of the hardship, to prevent evictions.

The legislation expired August 31, but Governor Kathy Hochul signed into law a new moratorium on COVID-related residential and commercial evictions for New York State which is in effect until January 15, 2022.

It is unclear as to whether the moratorium will be further extended due to the Omicron variant that is challenging the COVID recovery and has now been discovered in New York State.

While the moratorium has provided business owners with relief for more than a year, degraded commercial properties countywide and beyond represent a challenge for municipal governments and lenders while this period of suspension continues. Residents of Nyack are distressed over the 2 South Highland Avenue, which sits at the gateway of the village. Some have said that the building site is attracting vagrants. Gateway Loft Apartments, a new apartment rental complex is rising directly across the street.

But Hershko says he is no longer in foreclosure; that he has worked out a deal with his lenders.

“We have settled everything,” said Hershko, who lives in Orange County. “We’re not in foreclosure.”

The property owner, 63 said plans for his properties were delayed due to a broken back suffered in a car accident, and subsequently open-heart surgery.

In fact, the property owner says he has big plans for all his Nyack properties.

The property at 20 South Broadway houses Brickhouse Food & Drink, which continues to operate. Hershko said he plans to raze the building at Sixty-Five On Main and submit plans to the village for 24 luxury rentals and 20,000 square feet of commercial space.

The property owner also plans to construct three apartments and five offices on the second floor of the former Woolworth building.

“Certainly, if there’s a business operating in there, that’s good news for the village but plans have not come before the building department,” said Village Mayor Don Hammond. “I have not heard from Mr. Hershko.”

The taxes on the property are in arrears in excess of $35,000, as of today’s publication.