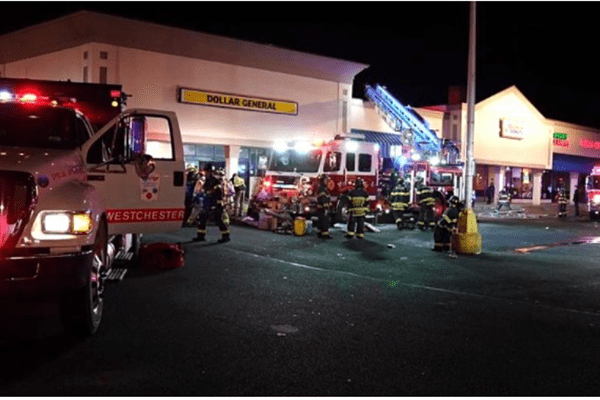 Firefighters on Monday morning were continuing to douse hot spots from a fire that began Sunday afternoon at Rise, an indoor gun range in Pearl River.

The Pearl River Shopping Center on Middletown Road in Pearl River was evacuated as firefighters battled the blaze for more than nine hours. At least three people were sent to the hospital. More than a hundred firefighters from Rockland, Westchester and Bergen counties responded to the fire.

By mid-Monday, most of the businesses were closed or assessing the damage. The cause of the fire remains unknown but is believed to have stared in the space between the Rise (Rockland Indoor Shooting Education) gun range and the neighboring stores.

The gun range sits at the corner of the shopping center on Middletown and Blauvelt Roads. The fire spread to a Dollar General Store.

“The gun range looks annihilated,” said Dennis Zysman, co-owner of the Retro Fitness Gym. “They were located in the basement of the Dollar General. It looks like the roof has collapsed; it looks like there’s nothing left to be salvaged.”

There also appears to be extensive damage next door at the Dunkin’ Donuts, he said.

Zysman arrived at his business on Monday at 5 am.

“They’re still shooting water onto the roof over Dunkin,” he said. Retro Fitness is closed because of smoke but Zysman has hired ServePro to scrub down the floors, walls and ceilings. “We’re hoping to be open tomorrow.”

Zysman said the timing of the fire has hurt business.

“There are two times of the year we sell the most memberships: right after Black Friday and after New Year’s Eve when people make their new year resolutions.” Shut down Sunday, Monday and potentially more days this week, the business has lost that window of opportunity.

“This is the worst week, outside of New Year’s Week, for a gym to be closed down,” he added.

The timing is also a hardship for Michelle Worob, owner of Luigi O’Grady’s Deli & Catering.

“We are in full holiday swing,” said Worob, adding the deli has suffered some minor smoke and ceiling damage, and will be closed for a few days but possibly up to a week. “This is terrible timing. We have several events this week, on the weekend, office caterings. But I have a lot of friends who have stepped up and will help out.”

Rise sits below a Dollar General store and Dunkin coffee shop. Worob said a firewall between Dunkin’, which is next door to Dollar General, and the adjoining shopping center likely prevented a greater disaster for the other businesses.

Still, Rise’s location made the fire difficult and dangerous to fight. “It’s 20 or 30 feet down below grade,” said Pearl River Fire Chief Jim Morrison. There’s no ventilation down there. I’m getting a lot of guys come up with CO poisoning,”