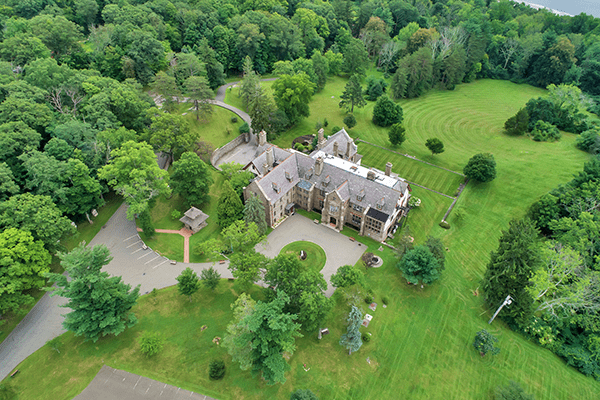 A California hotelier is purchasing St. Mary’s Villa Retreat House at 150 Sisters Servants Lane in the Town of Ramapo for $11 million, pending court approval. W. Alex Glasscock, owner of The Ranch in Malibu, plans to create a mid-size boutique hotel and wellness spa on the bucolic property tucked away off Sterling Mine Road.

The 180-acre property was listed in August 2020 for $19.9 million. The Servants of Mary Immaculate Inc. need approval from Rockland County Supreme Court to sell nearly 140 acres, includes St. Mary’s Villa, a 52-room residence, as well as several other buildings.

The Sister Servants, a congregation of Byzantine Catholic sisters intend to maintain ownership of 45 acres, which includes St. Joseph’s Adult Care Home, the Motherhouse, several buildings, and a cemetery.

The sisters hope to sell the property to finance a 20,000-square-foot addition for St. Joseph’s Adult Care Home to increase capacity from 31 to 50 beds for the elderly.

Rand Commercial broker Donna Licata, who sold the property, said more than one hotelier vied for the parcel. Many of Rockland County’s large parcels are being eyed for boutique or luxury hotel properties including the former Letchworth campus in Stony Point and the former HNA Palisades Conference Center in Orangetown.

“People from the city are looking for destination hotels closer to home,” said Licata. “They want to come out for a weekend and recharge.”

Licata said Glasscock, who founded the California hotel with his wife Sue in 2010, intends to create a similar property to The Ranch in Malibu, which Conde Nast Traveler named “#1 Destination Spa Resort” in the U.S. in both 2020 and 2021. The luxury wellness hotel and spa offers fitness, hiking, yoga, and weight training in the hills above the Pacific Ocean. The retreat, situated on 200 acres in the Santa Monica Mountains, has 19 cottages. Rates for a one-week retreat begin at $8,600, and month-long packages cost $33,600, according to the hotel’s website.

St. Mary’s Villa Retreat House is a 40,000-square-foot mansion set on 40 acres. The buyer has agreed to relocate the St. Mary’s sign and the Statute of St. Mary, according to the contract. The contract also specifies that if the Sisters sell the remaining portion of the property, the hotelier has the right of first refusal.

The buyer has also agreed to maintain the Grotto and Altar, and to grant the sisters license to access these features. They’re also allowing the sisters to “taking recreational walks on the property from time to time,” provided the walks do not interfere with the buyer’s guests. The two entities have agreed to draw water from the reservoir. The buyer has agreed to pay $100,000 for the construction of a storage building, and will maintain the roads, lawn and snow removal for the Sisters.

The religious order, which has not seen any growth in decades, can no longer maintain the 31-bedroom estate built in 1904 for William Pierson Hamilton, great-grandson of American Founding Father Alexander Hamilton. The 40 acres for sale were once part of the 2,000-acre estate, which was built for Hamilton and his wife, Juliet Pierpont Morgan, the daughter of the financier J. Pierpont Morgan. Juliet was the daughter of the financier, J. Pierpont Morgan (1837-1913). William was the great-grandson of Alexander Hamilton (1757-1804), the US statesman and first Secretary of the Treasury.

There are 16 sisters in this province with a median age of 80 years old.

Over the years, the estate has been parceled off. St. Mary’s Villa Retreat House was originally listed three years ago for $22 million.