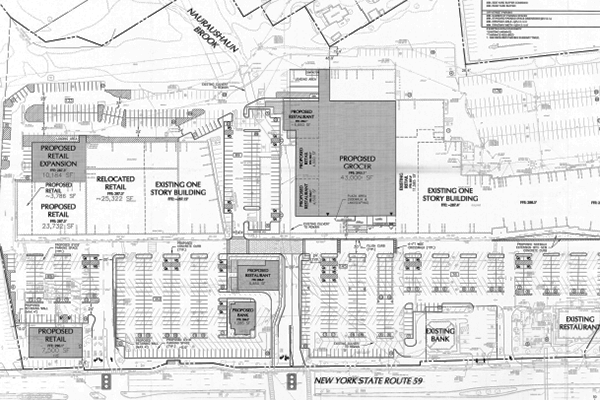 Plans Calls For Demolition Of Former Modell’s and Nanuet Diner; Adds A Bevy Of Restaurants

Brixmor Property Group, the owner of Rockland Plaza on Route 59 in Nanuet, is planning a shake-up on its site with the demolition of four buildings including the former Modell’s and the Nanuet Diner. A new vision would add a bevy of restaurants and food retailers to the center.

The company is seeking initial feedback at the Town of Clarkstown Technical Advisory Committee (TAC) meeting on Nov. 3 on a plan to demolish the building that once housed Modell’s, Destination Maternity, and remains the location for Marshall’s. The shopping center plans to replace the existing structure with a new 57,660-square-foot building housing a 43,000-square-foot grocer, two restaurants and a retailer –effectively creating an envisioned food hub.

The plans do not indicate which grocer is slated for the space or whether the building would be built on spec. The shopping center is home to The Matter of Health, and is across the street from the relocated Stop & Shop, which recently took over the space Fairway had occupied.

Additionally, the plan also calls for demolishing the Nanuet Diner, and replacing it with a 7,500-square-foot retail space along Route 59.

Two additional small structures are proposed in what is now the parking lot – one 1,285-square-foot building is slated to become a bank; the other 5,850sf building is also envisioned to be a restaurant.

With the recently added Shake Shack and Chipotle to the center, food will dominate the shopping center’s offerings.

In 2020, the former Dawg House sparred with Brixmor over an exclusivity clause in their lease that the restaurateur had said should have precluded Shake Shack from coming to the center. He wanted the landlord to release him from his $7,500-a-month lease. The two sides came to undisclosed terms, and Dawg House closed.

Brixmor’s new plan also calls for a 10,184 square-foot expansion in the rear of the building occupied by PetCo, and a partition of the existing space for new retail of 3,786 square feet.

Although the plan calls for new construction, the company says there would be a net reduction overall of about 4,000 square feet.

Because the plan calls for reducing the number of parking spaces from 1,075 to 1,014, a variance from the Zoning Board of Appeals will be required. The plan also calls for the elimination of the commuter parking spaces along Route 59.

The 7,500-square foot building slated to replace the Nanuet Diner is located in a flood plain, and the plan calls for raising the structure two feet, in accordance with town code requirements.

In 2020, Brixmor demolished the 5,700-square-feet building where Michael’s Tuxedos was located and built a nearly 20,000-foot structure to house Shake Shack and Chipotle. The shopping center needed variances for the front yard buffer and to allow extra parking. They also need a variance to build in a flood plain. At the time, the applicant sought to increase parking from 1,025 to 1,079 spaces, and to re-stripe the entire parking lot at right angles instead of diagonal parking.