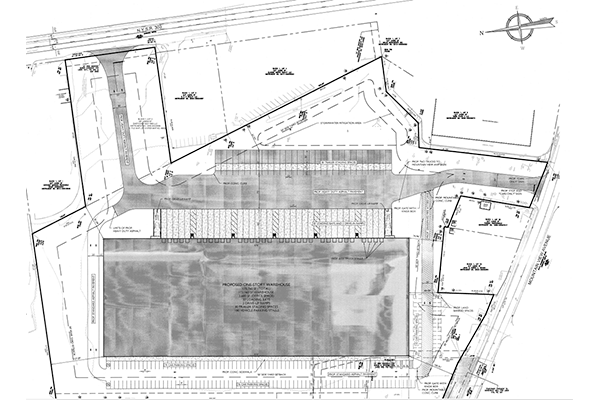 Warehouse Developer Does Not Need A Use Variance, Says ZBA In Unanimous Decision

Reversing a determination by Orangetown’s chief planner, the Zoning Board of Appeals unanimously ruled that a developer who wants to build a warehouse at 13 and 21 Mountain View Avenue and 516 Route 303 in Orangeburg did not need to apply for a use variance.

While the board offered no explanation for its decision, the ruling allows WPT Acquisitions, which plans to build a 175,760-square-foot warehouse on spec on a combined 14-acre parcel located in the Route 303 corridor, to move forward. The applicant must still submit a site plan for the Planning Board’s review.

The applicant had originally been sent to the Zoning Board of Appeals for a “use variance,” by the Office of Building, Zoning, Planning Administration and Enforcement (Town Planner) Jane Slavin, based on decisions rendered in February and July 2021. The decision required the applicant to seek approval for a specific use of land that she opined was not otherwise allowed or is prohibited by applicable zoning regulations. Slavin’s decision held that a 175,760-square-foot distribution warehouse exceeded the 65,000-square-foot limit permitted in the Route 303 Overlay District.

Toronto-based WPT is a developer, manager, and owner of more than 100 distribution and logistics properties in the United States.

Although there was community pushback for the project based on worries about overdevelopment, truck traffic and pollution, the Zoning Board of Appeals had only to decide on a narrow issue that boiled down largely to the definition of the term “retail,” and what is permitted in the Route 303 Overlay District.

Attorney Ira Emanuel, representing WPT, relied on the town code’s definition of permissible warehouse uses in the LI district, along with the argument that neither FedEx nor Linen Choice, which have both sited distribution warehouses in the 303 Overlay District, were subjected to the same scrutiny.

According to the town code, “retail warehouse uses including mini-storage uses and distribution centers which require or utilize a structure with a total combined square footage in excess of 65,000 square feet…shall be prohibited.”

But Emanuel also argued that the restriction on size applies only to retail warehouse uses, not wholesale distribution centers. “Such [prohibited] uses include retail (open to the public), such as Costco, Home Depot or similar big box stores.

“Thus, it appears that the drafters of the 303-OD were concerned with large retail uses within the overlay district,” he argued.

The attorney further argued that the 220,998-square-foot FedEx warehouse distribution center at 622 Route 303, also located in the Route 303 Overlay District, was approved in 2011 without the need for a use variance.

Attorney Steven N. Mogel, representing CUPON Orangetown, a non-profit group that fights overdevelopment, argued to the Zoning Board of Appeals that town drafters of the code did not mean for it to apply only to retail warehouse uses. He argues the inherent intent was broader, and was meant to include distribution warehouses.

Mogel wrote “The drafting of this provision is not a model of clarity.” He also argued “the Route 303 Plan seeks to create a balanced and sustainable approach to transportation and development in the corridor…by creating land-use control mechanisms that can address the environmental aesthetic issues.”

The attorney also pointed out that greenlighting this project would set a precedent at a time when the town and county are under pressure from pent-up demand for warehouse development. He also asked the board to take into consideration that the town is under way with an update of its comprehensive plan.