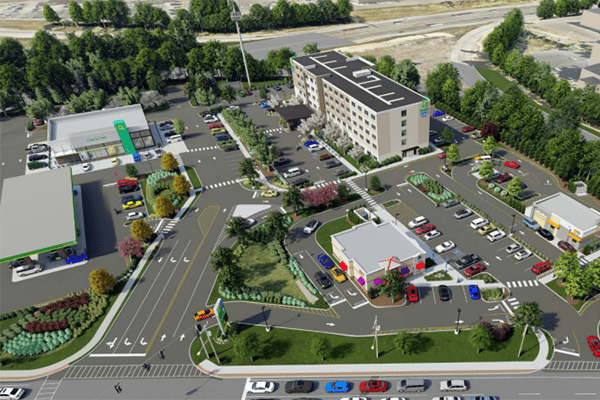 The Town of Clarkstown Planning Board greenlighted a proposal that will transform the nearly vacant Thruway Plaza Shopping Center on Route 59 into a hotel destination with a gas station and convenience store. The vote was unanimous.

Renamed Gateway Commons of Nanuet, the project is slated to include a five-story 121-room Holiday Inn Express, and a QuickChek with gas pumps on the 6.6-acre site. The revitalized shopping center will maintain the KFC/Taco Bell restaurant and the cell tower will remain on site. This will be Rockland County’s first QuickChek.

The 27,000-square-foot strip shopping center will be demolished and a separate Dunkin’ Donuts drive-thru will be added.

The ownership is a partnership between the Goldstein, Yassky and Kirchner families, which each have other residential and commercial real estate properties throughout Rockland County. However, the applicant is listed as Thruway Plaza of Rockland Associates.

The project, which has snaked through the approvals process for two-and-a-half years, needed three buffer variances from the Zoning Board of Appeals and a special use permit for a gas station from the Town Board, which was obtained Dec. 11, 2020.

Thruway Plaza was one of the first strip shopping centers on Route 59 in Nanuet, built in the 1960s. The shopping center is located at the exit/entrance ramp for the New York State Thruway, on the border of Spring Valley.

The slated Holiday Inn Express will become Nanuet’s fifth chain hotel, on or in the vicinity of Route 59. It joins DoubleTree by Hilton Hotel, Hampton Inn, Hilton Garden, and the most recent addition, Element Spring Valley.

The developers are anticipating new county hotel tax revenues and a positive impact to local sales and property tax collections. The Route 59 corridor has been undergoing a retail re-set with the closure of several big boxes and chains including Sears and Macy’s. Many sites have been repurposed for restaurants and storage. Additional changes are expected as the town is in the process rezoning the regional shopping district to include self-storage and mini-warehouses.

The 55-year-old plaza was damaged in a March 2020 fire that started in the Thruway Deli and spread to other vacant stores as well as the Dunkin’ Donuts. The Off-Track Betting parlor also closed.

The plan eliminates truck parking, increases traffic controls and improves pedestrian access with new ADA compliant sidewalks and striping at the property’s entrance on the busy stretch of Route 59 near the New York State Thruway, according to a recent presentation made to the Planning Board. Drainage and significant landscaping upgrades including green buffers and tree plantings are also envisioned. There will be no large truck parking or fuel station access for large trucks.