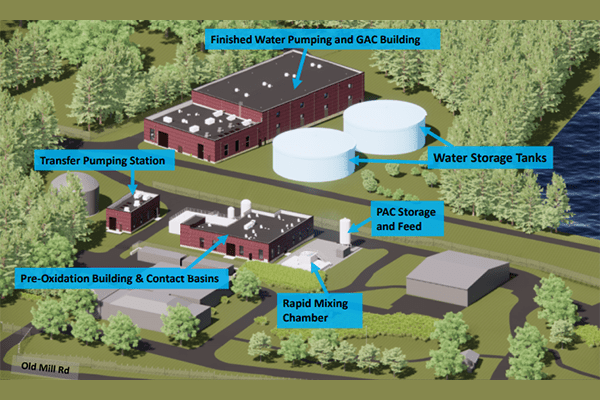 The proposal, which will be presented to the Clarkstown Town Planning Board on March 3 at 7:30 pm, is seeking preliminary site plan approval to upgrade its existing 22,785-square-foot water treatment plant with an expansion that includes a new transfer pump station, two above-ground storage tanks, and a raft of water treatment equipment. Each storage tank will have a capacity of 1.1 million gallons.

Suez seeks to upgrade aging infrastructure at the water treatment plant to address water quality challenges. Raw water quality has been affected by road salt, fertilizers, and other contaminants. SUEZ has achieved some success in addressing these water quality issues with temporary solutions, including use of copper-based lake treatment chemicals.

The 20 million gallon per day (mgd) water treatment plant, along with 61 groundwater wells, serves a population of approximately 300,000 in Rockland County.

The original water treatment plant was constructed with 48-inch/30-inch raw water main from the intake building to the existing aerator. In the 1970s, new raw water pumps, chemical additions, filter equipment and two new high service pumps were added. In the 1990s, a raw water pump was added to the site. Construction of a dissolved air floatation pre-treatment process to replace the aerator and convention flocculation/sedimentation process were completed in the mid-2000s. A supplemental standby power generation was added in the late 2000s.

Key upgrades under Phase I include raw water pump replacement, static mixer replacement with rapid mixing system, addition of pre-oxidation contact basins and treatment systems, underdrain replacement, and automation of the desludging system for the existing Dissolved Air Floatation Process, according to the proposal.

Upgrades under Phase II, which include the construction of a 42,000 square foot building, primarily focus on establishing an effective PFAS (perfluoroalkyl substances) treatment system because New York State has recently enacted and adopted a maximum contamination level for PFAS. The PFAS building will be located to the north of the existing water treatment plant and will consist of 14 sets of 12-foot diameter vessels used to absorb the contaminants.

PFAS have been used for decades in the manufacturing of firefighting foam, paints, cleaners, adhesives, non-stick surfaces and cosmetics. According to Suez, the substances are prevalent in food, air and water, adding the Environmental Protection Agency says most people have been exposed to the chemicals.

The Rockland Water Coalition, made up of more than 30 health and environmental groups that helped stop Suez’s proposal for a desalination plant in 2014, says there is reason to worry about PFAS, as there are more than 5,000 toxic chemicals in the PFAS family and that there is no known safe level of PFAS.