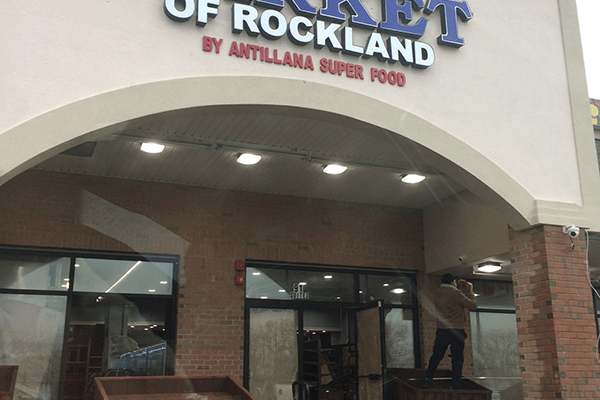 The Market of Rockland By Antillana Super Food, a woman-owned supermarket, is readying for a mid-February opening in the Village of West Haverstraw.

It is among a handful of new supermarkets planned for Rockland County, coming at a time when supermarkets have played a crucial role in offering sustenance and comfort during the protracted pandemic.

For years, supermarkets have struggled amongst competition from big boxes, online competitors, specialty stores and even restaurants. COVID lifted the supermarket status, as consumers sought to make fewer stops to buy food, ate out less or not at all, and spent more time honing culinary and baking skills.

There is new appreciation for one of the oldest American institutions – the supermarket. For many, the trip to the market is the main relief from monotony.

“We’re excited about the market, that’s for sure,” said Village Mayor Robert D’Amelio. “We’ve always known we need fresh food but that’s become even more important because of the pandemic. People are shopping more. They are more creative with cooking. I can remember when there was a meat market on Bridge Street. It’s been a while.”

Jasmine Perez is the owner of Antillana Super Food. Her family owns a similar but larger market in Perth Amboy, New Jersey. Perez said she chose the Village of Haverstraw location to serve a community that is dominantly Hispanic.

“We want to sell Spanish products that will appeal to everyone at unbeatable pricing,” said Perez. “We’re going to offer fresh meat, with two butchers, as well as deli, ham, cheeses, milk. And we’ll be selling fresh bread from Rockland Bakery.”

German-based discount grocer Lidl, which plans to open their first Rockland location at Tappan Plaza on Route 303, has received preliminary site plan approval and several variances from the Town of Orangetown. The supermarket is awaiting final site plan approval.

And sources tell RCBJ that Uncle Giuseppe’s Market in eyeing Rockland for an additional location.

The supermarket renaissance has reverse long-term food spending trends that once tilted in favor of non-supermarket spending. Food retail’s share of food spending rose from 50 percent in February to 63 percent in March and then 68 percent in April, returning to levels not seen since the early to mid-1990s, according to the recently released FMI-The Food Industry Association’s annual U.S. Grocery Shopper Trends study.

Meanwhile, restaurants — forced to close or offer only takeout and/or delivery — saw their share of food retail spending drop from around 50 percent to roughly 35 percent.

Perez said the market will include two professional chefs and two butchers. She’s hoping to open additional locations down the road.

“This is our first one in the Hudson Valley but we’re hoping to open more.”