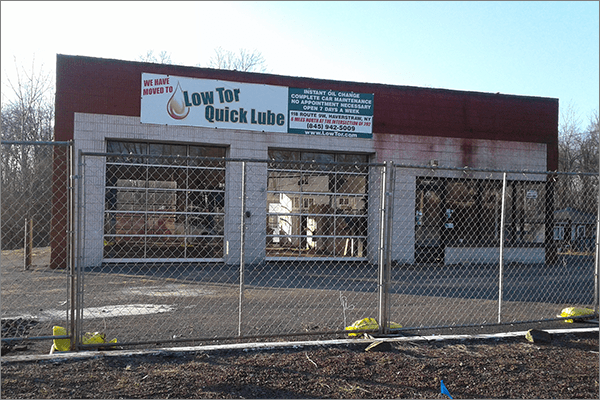 CVS is ready to break ground on a new Valley Cottage location after a nearly five-year court battle between a neighboring shopping center owner and the Town of Clarkstown.

GBR Valley Cottage, owner of Lake Ridge Plaza on Route 303 in Valley Cottage filed suit in New York Supreme Court in Westchester County against Clarkstown’s Zoning and Planning Boards as well as the developer, the owner of the former Cefola’s Oil Change, and CVS to stop the demolition of the existing structure and the construction of a CVS Pharmacy just to the north of its shopping center. Lake Ridge Plaza is home to Rite Aid pharmacy.

One of the issues was the ownership and access of a 60-foot right-of-way (ROW) that GBR claimed it owned and that CVS needed incorporated into its site plan.

GBR alleged in the suit that “No portion of GBR’s real property may be utilized by Town or CVS for any purpose, including its use as a means of ingress and egress to an adjoining parcel owned by ‘defendant.”

The town fought the claim, asserting GBR traded ownership over the right-of-way when it made the swap a condition of purchasing Ahearn Avenue for the development of its shopping center.

“Contrary to Defendants’ assertions, Plaintiff’s predecessor-in-title (Loomis J. Grossman) possessed legal authority to revoke the offer of dedication for the 60-foot right-of-way by virtue of the Subdivision Plat filed in the Office of the Rockland County Clerk in 1974,” the suit said.

GBR maintains Grossman revoked the offer of dedication and secured Clarkstown’s agreement that the industrial road should not be used due to traffic safety and planning issues.

The plaintiff argued the late Grossman exercised this authority and the revocation was acknowledged and accepted by the town when it deleted the right-of-way from the town map or “plat” in 1985.

“Defendants cannot now argue that the Town Board’s deletion of the 60-foot right-of-way from the official map did not relinquish its rights when that is precisely what the town board did when it abandoned Ahearn Avenue in 1974,” the suit read.

GBR also challenged the Negative Declaration issued under SEQRA by Clarkstown’s Planning Board, several decisions by the Zoning Board of Appeals (ZBA) granting variances to the CVS parcel, and both preliminary and final site plan approvals issued by the Planning Board in 2018 and 2019.

In a 47-page opinion, the Court reviewed GBR’s issues and found the actions of the Town to have been in compliance with the law.

This decision cleared the way for the demolition of the buildings and construction of a 12,016 square foot CVS with a drive-thru and sixty parking spaces.

Demolition permits have been pulled and work has begun on site. The new CVS will be direct competition for the Rite Aid Pharmacy at Lake Ridge Plaza.