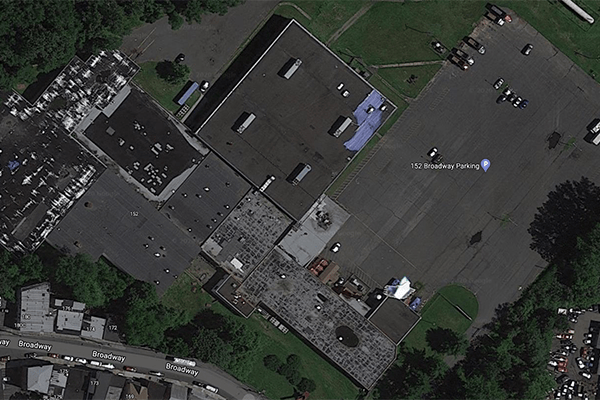 Key Property In Village Tied Up In Years Of Legal Wrangling

After years of legal wrangling including allegations of fraud, forgery, and perjury, the former Blue Beverage Bottling site in the Village of Haverstraw was purchased at public auction by Haverstraw Joyland Oz LLC for $3 million, though its plans for the factory and large site remain unclear.

“They are making repairs on the building but have not come to the Village to tell us their intentions about what they plan to do on the site,” said Village Mayor Michael Kohut.

The 22.6-acre site was once home to Hornick Curtain Factory founded in 1949 and shuttered in 2008 due to the recession. The Hornicks moved their manufacturing overseas. An entity called 152 Broadway Haverstraw NY LLC purchased the site for $6.5 million that same year.

For years, the village had hoped to redevelop the site with a mix of light industrial and residential housing, the mayor said.

“This has been in limbo for a long time,” the mayor said, adding that a 25-year update of the village’s comprehensive plan that is in progress is considering zoning changes for the site that could recommend residential housing as well as light industrial use.

The Blue Beverage Bottling company, housed in a 200,000-square-foot facility, was owned by Joseph Goldberger and Joseph Menczer, the members of the LLC that also owned the property. The plant was a co-pack manufacturer specializing in beverage processing, bottling and retort applications, and formulation evaluation.

By 2012, the company had run into financial difficulties and sought financing from outside investors Joel Wurtzberger and Aron Wolcowitz, with the intent that the pair would eventually acquire the business and the property.

In 2014, the parties executed a mortgage in favor of Wurtzberger’s and Wolcowitz’s LLC, Broadway Equity Holdings LLC, securing the debt to the investors.

The investors sought to foreclose on the property in June 2015, which set off nearly five years of litigation including a referral to bankruptcy court, and ultimately a judgement of foreclosure in favor of the investors.

In a May 27th, 2020 29-page order issued by the Southern District of New York Bankruptcy Court, Judge Robert Drain ruled in favor of Wurtzberger and Wolcowitz, allowing the foreclosure to proceed to public auction. Following a contentious three-day adversary proceeding, Drain dismissed Goldberger and Menczer’s claims of forgery, slander of title, and notary fraud, and said, “Indeed, in making such allegations, Goldberger and Menczer likely committed perjury; in any event, their testimony was consistently lacking in credibility, at times almost breathtakingly so.”

Goldberger and Menczer had claimed they never agreed to the note and mortgage, their signatures were forged, the mortgage slandered their good title, and the documents were improperly notarized. Drain appointed Barton Schwartz as referee to sell the property.