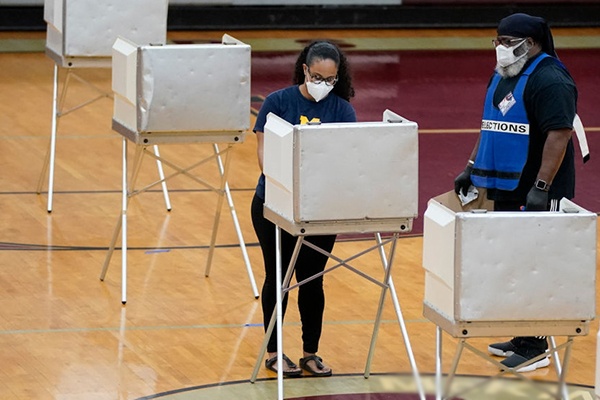 The Nyack School Board, which wants to purchase a commercial retail site adjacent to Nyack High School to convert to a parking lot, voted Tuesday to set a date for a voter referendum even though two board members raised objections to setting a one-day in-person vote while the COVID pandemic rages on.

“This is a serious issue,” said Board Trustee Beth Davidson. “This is people’s health.”

At issue is whether the district can convince Gov. Andrew Cuomo to issue a one-time executive order to allow voters to use mail-in or absentee ballots due to COVID concerns for this special election, which the board has set for Jan. 22, with a snow date of Jan. 29th.

“The school district has been eyeing the property for a long time,” said Nyack School Board President Michael Mark.

“The Governor is not likely to issue an executive order just for the Nyack School district,” said School Board Attorney Ralph DeMarco.

In dissenting votes, board trustees Davidson and Jen Marraccino, expressed concerns that COVID illness or precautions would suppress voter turnout, as many might be reluctant to come out to the election sites.

“I’m worried about turnout,” said Marraccino. “And when it comes to executive orders, the Governor has not been speedy in making decisions about absentee voting.”

DeMarco said the district can lobby the governor though it is unclear whether a decision would be rendered in time. Cuomo used an executive order to allow absentee ballots during the general election. That executive order expired Nov. 3rd.

The majority of the board, and Board Superintendent James Montesano, urged the members to move forward, citing the potential sale as a unique opportunity since the site is adjacent the high school and the price has been reduced over time.

Asked whether the board could cancel the contract if it is unsuccessful in getting an executive order for mail-in ballots, DeMarco said the board should act in good faith and hold the election.

Voters need to give their approval for the district to purchase 366 N. Highland Avenue on Route 9W, the small shopping center popularly known for the Pie Lady’s former location, for $687,500.

The contract of sale is contingent on the district holding a vote within 90 days.  State law requires 45 -days advance notice to the public.

The small retail strip on 1.1 acre of land would be turned into a parking lot to accommodate 200 parking spots. The property is located west of the intersection of Birchwood Avenue and North Highland Avenue within a mixed use residential and commercial area of Upper Nyack.

The resolution also says, “the parcel under consideration would provide much needed additional vehicle parking and open space for students, families and community members.”

The contract also allows the district to terminate the contract should environmental issues be uncovered. The board voted unanimously, 7-0, on a negative SEQRA declaration related solely to the acquisition, but not the condition of the site. DeMarco said depending on what the district decides to do with the land, an additional SEQRA review might be needed.

The board voted 5-2 on both the execution of the contract and setting of the one-day in person election.

Former Board President Bryan Burrell said he favored the purchase but urged the board to do provide a safe and secure vote.

“The school district has been eyeing the property for a long time,” said Nyack School Board President Michael Mark. The district faces constant challenge with providing adequate parking during sports events, graduations, or other instances when large crowds gather at the school.

Though voters will ultimately decide whether to green-light the purchase, the district does not have a broader financial estimate on what it will cost to raze the buildings, build a parking lot, and mitigate the site, which is visible along Route 9W.

Asked about these financial uncertainties, along with concerns over COVID costs and a possible 20 percent cut in State aid, Montesano said the district has $5.2 million in its unassigned balance fund. “The district is in a healthy position financially.”