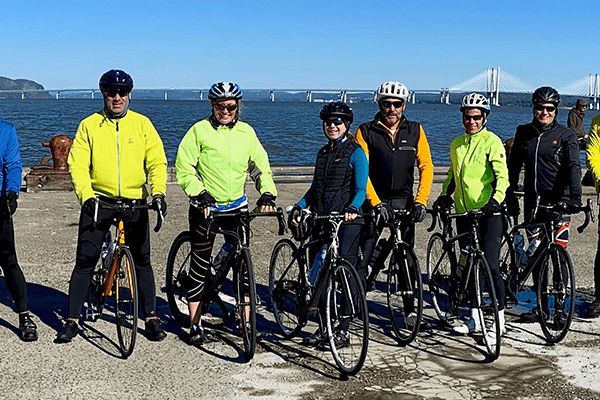 The pandemic has thwarted our natural need for social connectivity. How many clubs and organizations have either been in a state of suspension or have migrated online to gather by Zoom?

Too many. But at least one – the Rockland Bicycling Club – has maintained some continuity – even holding its annual October event Ride Round Rockland because cycling has the built-in advantage of being an outdoor socially-distanced sport.

“At first, a lot of people made the decision not to ride bikes for a period,” said Mike Hays, the club’s president. “Then biking became a big deal this year.”

Millions of Americans have been swept up in the cycling frenzy that has emptied bicycle stores across the nation, including those in the county, and swamped manufacturers with a backlog of orders.

Between April and July — the peak of stay-at-home measures in the U.S. — bike sales were 81 percent higher than in the same period in 2019, according to New York-based market research firm NPD Group. In April alone, as the coronavirus raged across the country, sales for bikes and accessories grew to $1 billion — far higher than a typical April, when sales add up to $550 million to $575 million.

Rockland Bicycling Club, a non-profit founded twenty years ago, is a relatively small club with about 100 members. For the most part, members are serious cyclists — the neon lycra and cleat-wearing road warriors we try not to knock down when we’re driving. Members are highly social from April through November, and get together every year at a Christmas party. Club dues are $25 annually.

You have to be a member to ride with the group, which plans at least weekly outings of varying speed and distance and routes. But the club has also become a tourism ambassador for Rockland County with its Ride Round Rockland event, that was founded in 2018.

“Ride Round Rockland has done a lot to promote tourism here,” said Jeremy Schulman, Rockland County’s director of economic development and tourism. “The event brings cyclists from the entire region. It shows off Rockland’s beauty.”

“We didn’t think much about tourism three years ago,” said Hays. “But Ride Round Rockland was branded with Rockland County. We’re proud of Rockland. It’s hilly and it’s got beautiful back roads. And now the new (Mario Cuomo Bridge) path, which has become a better way to connect to Westchester.”

Ride Round Rockland attracted 35 riders in 2018 and 100 in 2019. The club had reached across the county borders to other bike clubs to grow participation last year and was gearing up for an even bigger turnout in 2020. The pandemic forced them to slam on the brakes — at least temporarily.

As June rolled around, club members struggled with its decision to stage an annual ride.

“Only in June did club members start to get together again to ride with COVID rules in place,” said Hays. This was not a normal season, with restaurants and bathrooms being off limits.

But the club members were determined to make an annual event workable. For the first time, the group created a rest stop at the Orchards of Conklin, which had a festive atmosphere that included wrapped food, snacks, water, music – with social distancing and mask-wearing rules in place.

The group used a Rockland County tourism grant of $1,000 to promote its annual October event through Facebook advertising.

The October rides (varying in length and route) started at Rockland Lake but this year were staggered to keep crowd numbers lower.

In all, 55 cyclists rode in Ride Round Rockland but there was a welcome surprise: 35 of those riders were new members from Rockland County, The Bronx, Queens, Manhattan, New Jersey, Westchester, Long Island and Orange County. Not only did this make a bit of money for the club — it brought new blood to the county.

“We were really surprised by how the numbers broke out,” said Hays. “It was neat. We grew our membership by 30 percent.”

And the county’s promotional dollars too were well spent, given the difficulty of promoting tourism at a time when coronavirus cases are creeping up regionally and spiking nationally.

“Theaters are closed, museums, concert venues, everything,” said Hays. “This is a ray of light. There’s not a lot to do this year. Cycling has been an exception.