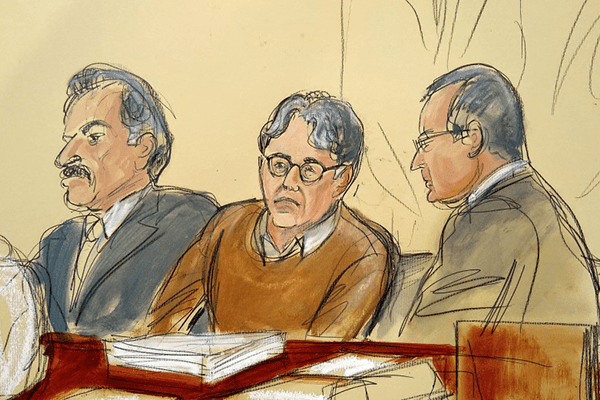 Former Rockland County resident Jessica Plaut is a 58-year-old woman who lives in California and works in the healthcare industry. But the mere mention of Keith Raniere, who she knew decades ago from the Green Meadow Rudolph Steiner school in Chestnut Ridge, transports her to a chilling childhood chapter of her life. Speaking with visceral contempt and palpable pain, Plaut, by phone, vividly recalls Raniere’s abusive tactics toward female students, his false sense of peacock-like superiority, and an uncanny skill at manipulation, particularly where it concerned teachers and elders.

“He was like Charles Manson,” said Plaut. “He had animal magnetism, but he was pure evil. He has no soul.”

Today, Plaut is pleased Raniere will spend the rest of his life behind bars.

Raniere, the disgraced leader of a self-improvement group in upstate New York convicted by a federal jury in New York of turning women into sex slaves who were branded with his initials, was sentenced Tuesday to life in prison after dozens of victims gave graphic testimony about how he manipulated and sexually abused them. He was sentenced to 120 years in prison for sex trafficking and other crimes.

The self-help group NXIVM — pronounced NEHK-see-uhm –gained notoriety as a “sex cult” last year when Raniere was convicted for creating a den of sexual “slaves” branded with his initials and kept in line with blackmail.

Raniere, 60, built his following in Albany but honed his skills as a child in Rockland County. Raniere’s father James was a New York City ad man, and his mother Vera Oschypko, a ballroom dancing instructor who died in 1978 when Keith was 18. Raniere’s father, who died this year, recalls that Vera “drank more than she should have,” and in adulthood, Keith, an only child, privately described his mother as an alcoholic, according to several published sources.

The family relocated from Brooklyn to Suffern when he was five; his parents separated three years later.

From the late 1960s to the early 1970s, Raniere attended Green Meadow. One classmate recalled an incident in which she had unwittingly shared “compromising” information about one of her sisters in front of Raniere, then aged around 10. According to her recollection, Raniere had told her: “You know, it’s like I have this little bottle of poison I can hold over your head … I just don’t think your parents or your sister would be very happy if I told them.” She claims Raniere “would call me sometimes and say, ‘Little bottles, little bottles.'”

Plaut, who struggled with eating and social disorders as a child, said Raniere constantly bullied and belittled her during their time together at Green Meadow. She recalls when she asked if she could peer into his microscope. “Just as I put my eye over the aperture, he yanked the slide. And when I couldn’t see anything through the lens, he said that’s because I was too stupid.”

Plaut, and others who recall Raniere’s school days, describe him as a boy who flaunted his intelligence but felt frustrated by an inability to attract girls’ affections.

“Really he was a lone wolf,” recalls Plaut. “I think his father was a hard-driving man and his mother was an alcoholic, which made her an easy target. I think that’s where Keith developed a deep-seated hatred of women. And I think he spent his life trying to take away women’s power because he felt powerless.”

Raniere eventually transferred to Suffern High School for ninth grade before transferring to Rockland Country Day School in Congers, NY; he graduated in June 1978, two months prior to his eighteenth birthday. As an adult, Raniere reported that he read Isaac Asimov’s mind control-themed work Second Foundation at age 12 and credited the novel with inspiring his work in NXIVM.

Raniere founded NXIVM with former nurse and co-defendant Nancy Salzman near Albany in the 1990s as a self-help organization. Over time, more than 16,000 people paid substantial amounts of money to take the group’s classes in the United States, Canada and Mexico.

For more than a decade, Mr. Raniere, known to his followers as Vanguard, peddled the notion that NXIVM could help people find enlightenment and inner peace. The group attracted high-profile followers like the actress Allison Mack and the liquor heiress Clare Bronfman. Raniere, a short man with tussled hair and blue eyes, presented himself as an omnipotent savant and recruited valued adherents to form a secret subgroup called D.O.S., in which women were assigned to have sex with him and branded near their pubic area with his initials.

Followers adhered to strict diets, restricted to as low as 500 calories a day. They were required to hand over collateral, including photos of their genitals that they feared would be released if they disobeyed orders.

In March 2018, Raniere was arrested in a Mexican fishing village, after he attempted to hide in a closet as armed officers raided his residence. The guru had fled there with a few members of his inner circle following the publication of a damning scandal about NXIVM.

The Vow, HBO’s nine-part series on NXIVM’s multilevel-marketing, is a marathon of footage that shows time spent inside the fold as well as dissenter’s effort to band together to end Raniere’s reign. The “cast” includes Catherine Oxenberg, the former Dynasty actress and onetime NXIVM dabbler, who is trying to rescue her daughter India from the group’s grip.

Throughout the trial, Raniere maintained his innocence and said he continued to believe in his teachings. Raniere’s followers believed him to be a “genius” with an off-the-chart IQ and divine powers.

At the trial, scores of women and men testified Raniere’s views of women were deeply misogynistic. He demanded some women starve themselves to appeal to his appetite for ultra-thin women. He maintained several sexual relationships but ordered women to have sex only with him, witnesses said.

NXIVM eventually began to implode when some group members in 2015 learned about D.O.S., an acronym for a Latin phrase that roughly translates to “Lord/Master of the Obedient Female Companions.” He recruited eight women, including the actress Mack, known for her role in the television series “Smallville,” as “first-line masters.” Mack, also a co-defendant, and the other women were considered Mr. Raniere’s “slaves” and also recruited slaves of their own.

In late September, Clare Bronfman, an heir to the Seagram’s liquor fortune, was sentenced to an 81-month prison term and immediately put behind bars for her role as an unwavering benefactor of Raniere.

U.S. District Judge Nicholas Garaufis gave Bronfman the harsh sentence at a hearing lasting more than three hours and featuring emotional statements from several victims gathered in a courtroom under strict coronavirus safety protocols. The judge repeatedly scolded Bronfman for standing by Raniere and his upstate New York organization, even after the evidence made clear she eventually became aware of his sex-trafficking scheme.

Bronfman had long been affiliated with NXIVM, giving away tens of millions of dollars to bankroll Raniere and his program of intense self-improvement workshops that prosecutors labeled a pyramid scheme. Ex-followers told the judge that for years, Bronfman had used her wealth to try to silence NXIVM defectors.

Courtroom drawing from May 2019 of Keith Raniere, center, leader of the cult group NXIVM.
(Elizabeth Williams)