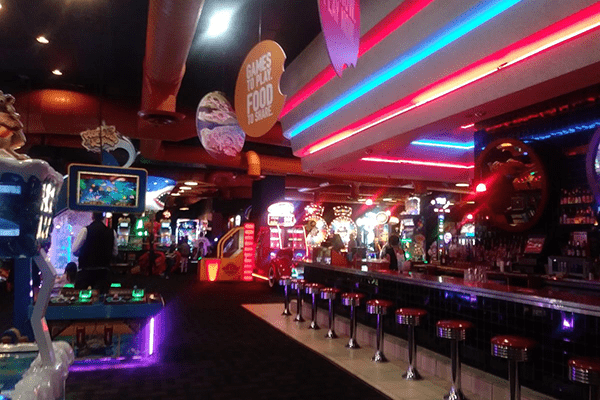 Dave & Buster’s will likely file for bankruptcy and the entertainment company plans to permanently close its Palisades Center location by the end of the year.

If Dave & Buster’s is unable to get its lenders to agree to new terms on its debt, the entertainment company says it will seek bankruptcy protection from its creditors. The WSJ reported Dave & Buster’s received waivers on some of its loans through Nov. 1, but if the company doesn’t secure additional breaks, it may file bankruptcy, according to a filing with the Securities and Exchange Commission. Dave & Buster’s revenue plunged 85% to $50.8 million during the second quarter compared to last year.

The restaurateur has so far reopened 90 of its 130 restaurants. But the company does not believe it can sustain itself.

Dave & Buster’s borrowed all its remaining funds under its revolving credit facility and negotiated an amendment to its existing credit facility granting relief through Nov. 1, according to CoStar. If Dave & Buster’s isn’t able to secure additional waivers, executives say it “would have a material adverse effect on the company,” and may result in filing a voluntary petition for relief under Chapter 11 of the U.S. bankruptcy code to implement a restructuring plan, according to its recent quarterly filing.

Dave & Buster’s says temporary layoffs which began in the beginning of March due to the coronavirus pandemic will become permanent on December 8.  Some 211 employees will be let go, according to New York’s Department of Labor Warn notice. The layoffs will affect 121 employees from the Palisades Center and 90 from the Pelham Manor location at Post Road Plaza.

The notice says layoffs have been caused “by unforeseeable business circumstances prompted by COVID-19.” The restaurant/arcade franchise currently has over 130 locations nationwide, with several in and around the Hudson Valley.

Entertainment companies like Dave & Buster’s that draw crowds to eat, drink and play together, have been especially hard-hit by the pandemic. Dave & Buster’s location at the Palisades Mall in West Nyack, which occupies 50,747 square feet, is contiguous with vacant space that the mall is trying to build out on the fourth floor.

On the Nov. 3rd general election, Clarkstown voters will decide whether or not they want to let the Palisades Center lift a restriction that prohibits the mall from building out and leasing existing but an unused 240,000-square-foot section on the mall’s fourth floor. Sources close to the Palisades Center say the mall continues to seek entertainment-related tenants.

A referendum is required under a so-called restrictive covenant the mall owners agreed to when the West Nyack mall was being built in the 1990s. Approval by voters would take away restrictions on the mall’s indoor space.

Mall representatives over the past two years have been telling town leaders the expanded space would be used for entertainment or “experiential” use but the timing makes that uncertain now. The Palisades Center is having to content with the behemoth of New Jersey’s American Dream Mall, which began opening late last year with a vast raft of pleasurable entertainment options. But the pandemic has all but shut down the entertainment sector for now and until the U.S. gets control over the virus or a vaccine is developed, uncertainty lingers over what will give the Palisades Center the lifeline in needs.