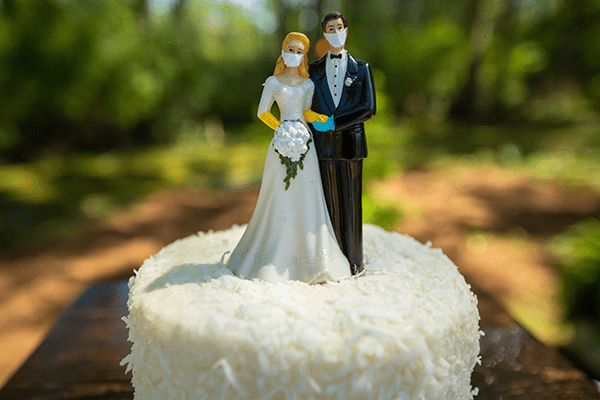 In June 2019, a Brooklyn couple paid a $43,000 deposit to Valley Rock for a June 2020 weekend wedding for 150 guests. The couple chose the rural but sophisticated resort in Sloatsburg because “it was just the vibe we were looking for.”

The $86,000 planned event, due to take place June 19-21, 2020, was to include a ceremony, cocktail reception, dinner, dance party, after-dance party, and accommodations at the resort.

What began as a dream weekend wedding at an idyllic and sylvan Rockland County outpost turned into a bitter feud ending in litigation and ultimately a settlement that left both sides feeling cheated.

It is no understatement to say the coronavirus pandemic has thrown the world into chaos with closures, cancellations, and creative accommodations, particularly for restaurants and event venues. In March, Governor Andrew Cuomo prohibited gatherings of more than 10 people. Only on June 24 did the governor loosen restrictions on gatherings to allow as many as 50 people to congregate as he slowly reopened the economy due to coronavirus.

As the Brooklyn couple’s wedding approached, it was clear the June 19th wedding would be difficult to pull off but Valley Rock owner Michael Bruno offered to reschedule the event for later in the summer or in the year, or to downsize it.

“Every other client agreed to a change of date or a downsized wedding,” said Bruno. “We had only opened a week before their scheduled wedding, so we told them we’d give them any date they wanted.”

The Brooklyn couple considered rescheduling but with a caveat:

“Valley Rock expected us to postpone, and when we said we would not postpone or sign any new paperwork without addressing the possibility of a second cancellation due to Covid, Bruno said Valley Rock could hold the wedding the weekend of June 19-21 (despite the Governor’s Executive Order explicitly forbidding social gatherings of more than 10 people at the time) and “be ready in 24 hours to host an event for 150 people.”

At that point the couple wanted to cancel.

Many wedding contracts — but not all — contain a force majeure clause that allows either party to terminate the agreement if an event of nature (or an “act of God”), such as a hurricane, or an act by a third party, such as a strike or terrorist attack, has made it impossible for the parties to meet their obligations.

However, a pandemic is not necessarily a force majeure event of and by itself. But a cancellation because of a government order to shelter in place, for example, or a ban on public gatherings, would qualify.

The lawsuit, filed Aug. 17 in Rockland County State Supreme Court, cites the contract: “In the unlikely event that Valley Rock needs to cancel for any reason a full refund will be made.” The suit argues that “Valley Rock needed to cancel the wedding in light of the Executive Order’s prohibition on holding such gatherings.”

A second clause in the contract also appeared to strengthen the Brooklyn couple’s allegation that they were entitled to a refund. “Section 16 titled ‘Unforeseen Events’ states if an event is cancelled in whole or in part because of a force majeure condition,” the client is entitled to a full or partial refund. The contract further defined a potential condition as “regulations of the United States government.”

Undoubtedly, lawyers everywhere are examining and re-examining contracts like these going forward but many agreements that were inked before the pandemic still need to be sorted out. While the issue may boil down to the fine print or litigation, emotions too are running high. Event planners and their clients are still caught up in the mess of determining who is owed what and how can it be fixed.

“The couple handled this as though the pandemic only happened to them,” said Bruno, explaining that he’d hoped for flexibility. “There was no consideration that this happened to everyone. Everyone else rescheduled. So we settled it.”

At the same time, as couples plan weddings, many might be thinking about wedding insurance. The type of coverage couples select will determine whether a cancellation or postponement will be covered if the cancellation is due to COVID-19.

Bruno, a prominent entrepreneur who has transformed Sloatsburg with Valley Rock, says he could have accommodated the Brooklyn couple’s wedding with outdoor seating. At a certain point, he recognized it’s better to cut his losses and settle, while protecting the resort’s reputation.

The undisclosed settlement pleased neither side. The Brooklyn couple said they lost “ a lot of money and were forced to spend thousands more on a lawyer.”

They did tie the knot in a “a last-minute, disorganized Zoom ceremony with no celebration and with only our three parents present.” Asked what advice they’d give to others planning a wedding, the groom quipped “Elope!”

But he added, “Do not sign any contract that does not address the pandemic situation or one that is not clear about what happens when the event as described in your contract cannot take place.”

Bruno, in turn, said he is revisiting agreements for “worst case scenarios” which nobody ever thought possible.” He added, “we always want everybody to come out whole, ourselves included.”