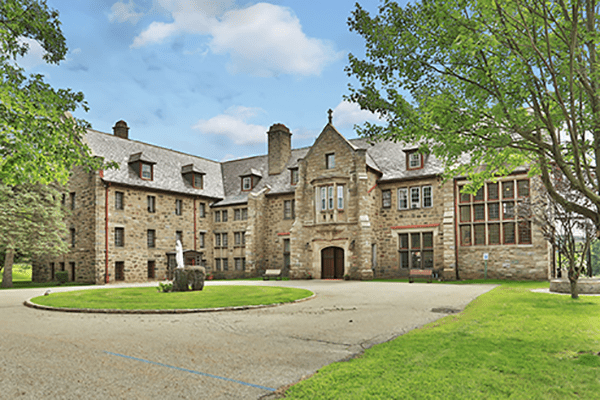 Fancy an English Gothic manse with a storied past tucked amid pristine forest in the Hudson Valley? Then you’re in luck!

St. Mary’s Villa Retreat House, a 40,000-square-foot mansion set on 40 acres at 150 Sisters Servants Lane in Sloatsburg, is once again on the market for a reduced price of $19.9 million. The four-story, 52-room house, used as a boarding high school for girls until 1979, and later for retreats, belongs to the Sisters Servants of Mary Immaculate, a congregation of Byzantine Catholic sisters, which purchased about 260 acres of the Table Rock estate, including Table Rock House, in 1941.

The sisters hope to sell the property to finance a 20,000-square-foot addition for St. Joseph’s Adult Care Home to increase capacity from 31 to 50 beds for the elderly.

The religious order, which has not seen any growth in decades, can no longer maintain the 31-bedroom estate built in 1904 for William Pierson Hamilton, great-grandson of American Founding Father Alexander Hamilton. The 40 acres for sale were once part of the 2,000-acre estate, which was built for Hamilton and his wife, Juliet Pierpont Morgan, the daughter of the financier J. Pierpont Morgan. Juliet was the daughter of the financier, J. Pierpont Morgan (1837-1913). William was the great-grandson of Alexander Hamilton (1757-1804), the US statesman and first Secretary of the Treasury.

Over the years, the estate has been parceled off. St. Mary’s Villa Retreat House was originally listed two years ago for $22 million. Listing agent Donna Licata of Rand Commercial said a previous offer to use the house as a hospitality venue fell through.

“It’s a great Hampton alternative, a nice compound for a family looking for a lake, tennis, equestrian, hiking trails. It used to be the summer house for the Pierpont Morgans.”

The property is zoned RR80, or 2-acre residential zoning in the Town of Ramapo. The Sisters hope to see the mansion live on, ideally with a single buyer.

“A movie star,” said Sister Michele Yakymovitch. “Hey, I can deal with that.”

The Sisters have used St. Mary’s Villa since 1941 but the order is fading out and the need to expand the adult care home is pressing. The Sisters are in the process of securing an assisted care license from New York State for the additional beds that are planned. Only 19 Sisters remain at the Sloatsburg congregation, and none have been added over the last decade.

“We have a waiting list of more than 30,” said Sister Michele.

William Hamilton, raised in the Sloatsburg area, brought in a village of Italian masons to construct the grand estate in 1904. All the stone was quarried on the property. Until the completion of Table Rock House, the Hamilton’s resided in the Morgan compound at 32 East 36th Street in Manhattan.

The estate included eight houses and a chapel, with Table Rock House (presently, St. Mary’s Villa) being the largest. The English Gothic structure is four stories high and every room in Table Rock House, including the baths, had its own fireplace. The house includes wine and coal cellars, offices for the family, and rooms on the fourth floor for the staff. The largest room, 83 feet by 22 feet with oaken walls and floors, was used for retreats. There is an enclosed porch with views to Sheppard Pond and the boathouse.

In 1919, within a month of her tenth birthday, Elizabeth Hamilton, the couple’s youngest daughter, died of the flu during the raging epidemic. A year later, the Hamiltons build a chapel in her memory which would serve as the final resting place for the Hamilton family and as a house of worship for the people of the valley.

The Sisters say the sale of St. Mary’s Villa is bittersweet – while they are looking forward to raising the funds needed for the adult care expansion there is a long history as stewards for the home of Elizabeth Hamilton.

“When Mrs. Hamilton sold us the house, it was on the condition that we use it as a high school to honor her daughter who passed away,” said Sister Kathleen Hutsko. “Unfortunately, we can no longer maintain it.”