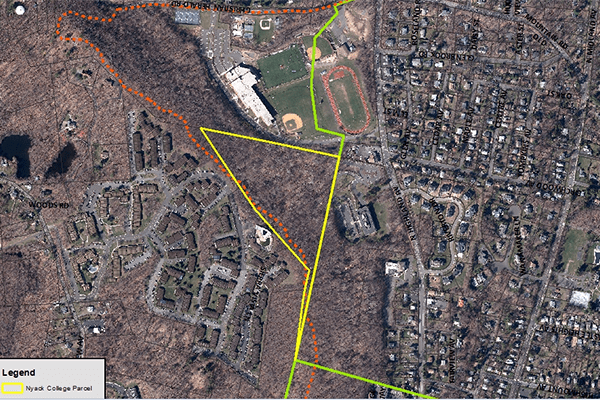 Drawing from a familiar playbook, Clarkstown Supervisor George Hoehmann told a group of concerned citizens the town is contemplating an open space purchase of 14.5 undeveloped acres that belong to Nyack College. The land is situated along Route 9W behind Nyack College’s Alliance Theological Seminary.

The town, which in recent years has purchased open space as well as the Grace Baptist Church and the Rockland Country Day School, envisions preserving the large swatch of steep land through a land trust.

The idea surfaced during a teleconference with Hoehmann and the Central Nyack Civic Association, which is concerned about the sale of Nyack College and the fate of the campus near the hamlet.

“We just want to know what’s going to happen with the Nyack College purchase,” said Audrey Vital, of the CNCA. “This is our neighborhood. Whatever happens with the purchase will affect us.”

During the phone call, Hoehmann confirmed to members there is a contract of sale on Nyack College, though he did not reveal additional details. RCBJ is reporting the presumed buyer is Rockland developer Berel Karniol, a Rockland condo developer in partnership with Gabe Alexander, who built the Pavion apartments in Nyack. The supervisor told the group everything is still “speculative” but floated the idea of purchasing the acreage that is steep, largely undevelopable, and zoned R-160, which is conservation land. At most, he told the group, 2.3 houses could be built there.

It is unclear why Clarkstown would want to purchase largely undevelopable land or how the town would finance the purchase. Members on the call said Hoehmann suggested the money could come from Rockland County’s $30 million open space fund, though economic hardship caused by the pandemic could make such spending uncertain.

“Tthe $30 million 2020 Capital Project line is only an authority and not actual funding,” said County Executive Ed Day. “In short, no money has yet been appropriated to fund any open space purchases. “We have made clear to those who have submitted properties, to be considered under the Open Space Program, that we are facing what amounts to a fiscal tsunami due to the COVID-19 pandemic and to make any purchase at this juncture would be absolutely reckless.”

In recent years, Clarkstown has acquired lands that have been the subject of controversy.

In 2017, The Town of Clarkstown purchased 4.3 acres of property owned by St. Peter’s Syro-Malankara Catholic Church for $235,000. Residents along Mountainview Avenue in Valley Cottage objected to development abutting wetlands. The purchase of the property thwarted the development of a 10,925 square foot structure and a parking lot for 55 spaces, while additionally protecting 2.357 acres of wetlands. The land connects to the Long Path, as does the seminary site proposed for acquisition.

Also in 2017, Clarkstown contributed $300,000 to the acquisition of thirty acres bordering Hook Mountain and overlooking the Hudson River as part of a $3.1 million agreement to buy the Marydell Faith and Life Center in Upper Nyack.

In an effort to stave over overdevelopment, the town in 2018 paid  $4.4 million to buy the Rockland Country Day School campus, adding an additional 20.5 acres of public land adjacent to the town-owned 33.5 acre Kings Park.

Earlier this year, the town purchased Grace Baptist Church on Demarest Avenue in Nanuet for $4.5 million after a protracted legal fight with a Jewish academy that hoped to buy the 3-acre property.

The Nyack College purchase has become a subject of focus for mayors, the Clarkstown Supervisor and Ed Day over the past several months. The sale is a private transaction but a buyer who wants to develop the property or use it for a nonconforming use will need approvals from the Village of South Nyack, and potentially from the Town of Orangetown, the Town of Clarkstown, and the Village of Upper Nyack.

Earlier this week a New Jersey-based architect presented a detailed vision for the redevelopment of Nyack College at the Village of South Nyack’s Zoom that included a new Village hall, library, senior and youth center, performing arts center, playground, and a plethora of housing options.

While the presentation, which had not appeared on the meeting agenda, seemed to come from left field, ENV New Jersey, a national architectural and interior design firm with offices in New York, New Jersey, Philadelphia, Virginia, and Los Angeles, was retained by Procida Funding & Advisors LLC of Englewood Cliffs, NJ, Nyack College’s financial lender, nearly three years ago to evaluate the campus for its infrastructure and the state of its buildings before Procida lent Nyack College $38.5 million.

Now, ENV principal architect Hans P. Erdenberger is suggesting the Village of South Nyack has a “once in a lifetime opportunity to shape your community.” The architect floated the idea that the Village should engage in a horse trade with the presumed developer, Berel Karniol, by floating a development plan that can be sweetened with tax and zoning change incentives. The architect did not offer a specific package for either.

“The Village should consider trading a tax PILOT and zoning concessions for a village square,” Erdenberger said.