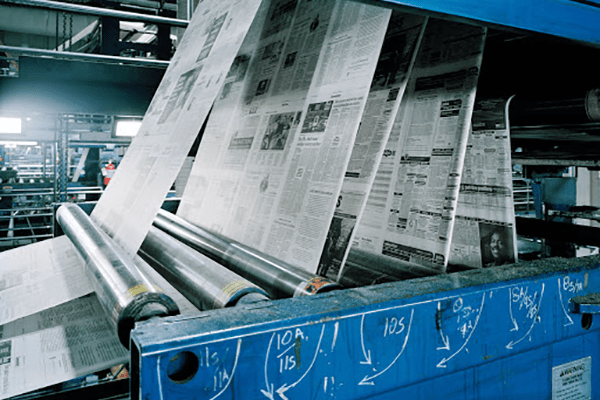 Nearly 100 Printing Plant Workers To Be Laid Off; Operations Relocated To New Jersey

Nearly 100 newspaper workers will lose their jobs before mid-May due to the closure of an Orange County printing plant.

Gannett’s Times Herald-Record based in Middletown, which covers Orange, Sullivan, Ulster and Pike, PA counties, plans to close its printing and production facility in Wallkill and relocate production and printing operations to a plant in Rockaway, New Jersey.  The Daily Record, a Gannett newspaper, is produced at the New Jersey plant.

The Times Herald-Record’s news and advertising departments will remain in Middletown.

Scores of newspapers nationwide are hobbled by declining print revenue. Community papers that have been absorbed into large chains are subject to cost-cutting measures and consolidations. Bulking up lets companies cut costs — including layoffs in newsrooms — and centralize operations.

Last year, GateHouse Media, a chain backed by an investment firm, bought USA Today owner Gannett Co. for $12.06 a share in cash and stock, or about $1.4 billion. The combined company has more than 260 daily papers in the U.S. along with more than 300 weeklies.

The merged entities plan to cut $300 million in costs annually and help speed up a digital transformation. Times Herald-Record in Middletown is owned by GateHouse.

The Times Herald-Record filed a notice with the New York State Department of Labor on Feb. 6 saying 94 employees would lose their jobs during the 14-day period beginning on May 10. The employees are not represented by a union, according to the notice. The reason cited to the Labor Department for the notice was “plant closing.”

Relocating the production to New Jersey will force the newspaper to meet earlier production deadlines in order to meet its delivery schedules. Earlier deadlines may preclude newspaper staff from reporting on late-breaking stories. Following in the footsteps of most newspapers, the Times Herald-Record will migrate late-breaking news to its website.

The move of production and printing to New Jersey is not expected to affect publication of the Times Herald-Record and home deliveries will continue to be made at the usual times. It is unclear at this time whether newspaper staff will be affected by cost-cutting.

The newspaper’s 2020 media kit does not provide circulation figures for the print edition but did state that the digital traffic for its online edition, recordonline.com, averages 5.91 million monthly page views and 751,330 unique visitors.

Newspaper consolidations have accelerated as local papers have lost print advertising and are finding it difficult to grow and monetize digital models.  While papers with national readerships like The New York Times and The Washington Post have had success adding digital subscribers, local papers with local readerships are having a difficult time. Hundreds of such papers have closed, and newsrooms have slashed jobs.

According to a study by the University of North Carolina, the U.S. has lost almost 1,800 local newspapers since 2004. Newsroom employment fell by a quarter from 2008 to 2018, according to Pew Research, and layoffs have continued this year.