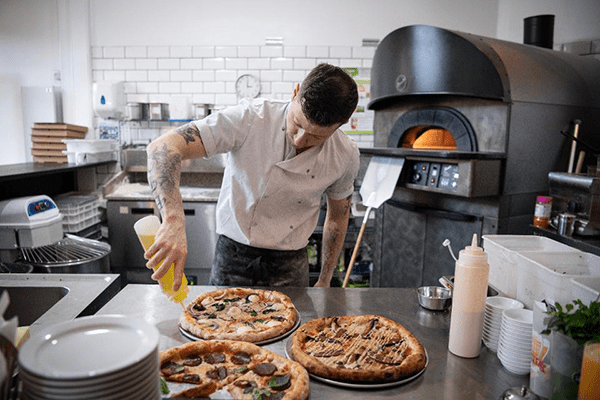 Simon Property Group is reacting to a changing retail environment with innovative partnerships that seek to reinvent retail as well as rescue it.

The retail developer, along with international hotelier Accor, and hospitality firm SBE Entertainment Group are joining forces to open “ghost kitchens” at 200 locations, including vacant space at shopping malls, by the end of 2021

The combined entity have launched Creating Culinary Communities, or C3, which is being described as a “Netflix-equivalent” of creating culinary content and delivering food via a non-traditional distribution channels.

Also Simon is partnering with the brand licensing specialist Authentic Brands and mall operator Brookfield, to buy a stake in Forever 21, which is in bankruptcy. The prospective buyers have put together a stalking horse bid for Forever 21 for $81 million, according to court papers. The bid would serve as a baseline for an auction for Forever 21 and includes a breakup fee of $4.7 million and expense reimbursement of $1 million if Forever 21 accepts an alternate deal.

The retailer proposed to the court a bid deadline of Feb. 7 and an auction, if necessary, by Feb. 10.

THE NETFLIX OF FOOD DELIVERY

A ghost kitchen is a general term that can include professional kitchen space for businesses that don’t have brick-and-mortar restaurant and only delivers or operates food trucks, or as commissary space that national chains use to fulfill delivery orders or for food preparation for smaller eateries. Commissary kitchens give businesses a way to offer food for delivery, an increasingly popular choice for consumers, without the expense of opening a brick-and-mortar restaurant or over-burdening such locations.

Ghost kitchens are becoming an innovative way for landlords, particularly at malls, to lease vacant space. Malls like the Shops at Nanuet, which is owned by the Simon Property Group, and the Palisades Center, have felt the brunt of retail bankruptcies and closures.

C3 has started construction of its first major restaurant, Citizens, which is scheduled to have a ghost kitchen and open at Manhattan West, the 7 million-square-foot project that Brookfield Properties is developing in the Hudson Yards district on New York City’s West Side. The 40,000-square-foot restaurant, by award-winning interior designer David Rockwell, will have two full-service restaurants, multiple bars and a fast-casual market hall.

Citizens will also have a 5,000-square-foot ghost kitchen, one of the largest in New York, which will serve customers both at the food hall as well as through delivery. The Miami-based firm said “through the growing network of ghost kitchens, C3 will take a major step in reimagining the concept of food delivery.”

There are other players in the ghost kitchen arena, including CloudKitchen, a company led by former Uber Technologies CEO Travis Kalanick, and Kitchen United, which is backed by RXR Realty and GV, formerly Google Ventures. C3 has signed four leases with CloudKitchen for ghost kitchens, according to The Wall Street Journal.

Simon is seen by industry players as an obvious fit for this partnership because of the mall owner’s global real estate platform and its need to rethink consumer experiences.

Retailers like Payless and Gymboree, are examples of retailers that have successfully reorganized and emerged from bankruptcy with pre-negotiated plans with creditors and other stakeholders for revamping the company and its finances

Without a plan, Forever 21 faced possible liquidation. Toys R Us proved how that can happen. The toy retailer entered bankruptcy hoping to right-size its business but failed to find investors to provide exit capital and back a reorganization plan, and then defaulted on its bankruptcy loan after a miserable holiday season. Lenders pulled the plug.

Others, like Bon-Ton and Barneys, hoped to find a buyer to keep the company operating past Chapter 11 after a reorganization plan failed to materialize but ultimately saw their physical footprints liquidated and intellectual property sold off. Authentic Brands, which has grown significantly amid the retail apocalypse and its many IP auctions, snapped up Barneys’ assets in November.

Forever 21, as its founding family held on to control, faced possible liquidation in bankruptcy, according to Bloomberg Businessweek.

Simon and Brookfield, as major landlords to Forever 21, have a stake in keeping the fast-fashion retailer and mall staple running. Here in Rockland County, Forever 21 is located at The Palisades Center, not the Shops at Nanuet, which Simon owns. The retailer rented nearly 100 stores from Simon in the U.S., representing 1.4% of Simon’s domestic base rent, according to securities filings.

In 2016, apparel retailer Aeropostale was sold in bankruptcy to a consortium of landlords, a deal that provided a model for Simon and Brookfield in their effort to buy Forever 21.