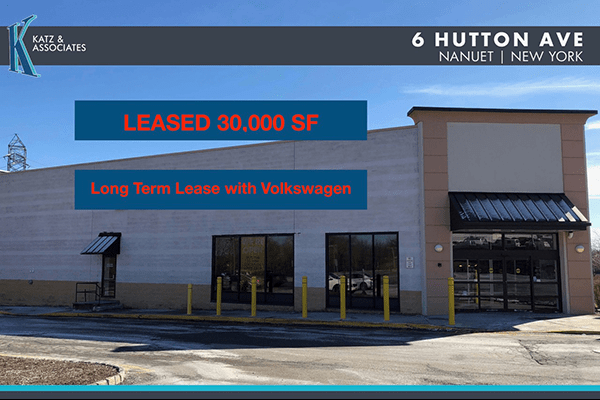 Volkswagen has signed a lease for 30,000 square feet at 6 Hutton Avenue in Nanuet, the former site of Bob’s Discount Furniture. The space, vacant for nearly a year, has gone through an extensive renovation. The dealership is slated to open in mid 2020.

“We had many offers on the property and mostly from non-traditional retailers with the most aggressive from car companies,” said Moskovic.

“Due to the changing climate in retail, ownership felt that re-purposing the property for a car dealership made sense for them. The decision to move forward with VW was based upon the strength of the operator, which owns several branded dealerships, and the mid-level price points that VW offers as opposed to the luxury brands,” Moskovic added.

The retail corridor along Route 59 in Nanuet and Spring Valley has been experiencing the compression of the retail sector, with several big box retailers closing or in bankruptcy. Other large vacant spaces including the former Sears building and the second floor of the former Macy’s site.

Most of Rockland’s car dealerships are located along Route 304.