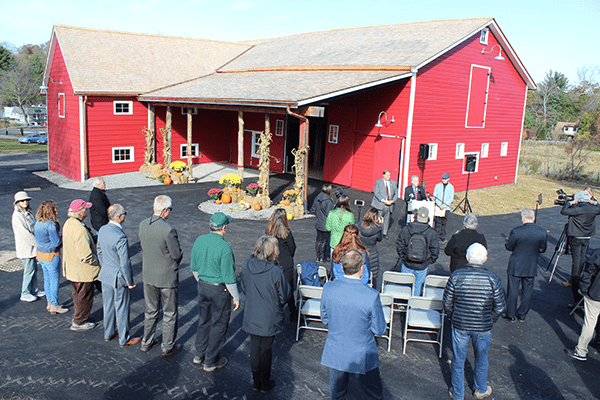 Even before the recently-completed $1.5 million renovation, the imposing but dilapidated barn on Little Tor Road in Clarkstown known as the “Cropsey Barn” stood as a reminder of Rockland’s past and respite from modern suburban sprawl. It filled old timers with nostalgia and brought generations of families to participate and protect a piece of what’s left of the county’s rural roots.

Still, the 1796 New World Dutch Barn, owned jointly by Rockland County (61%) and the Town of Clarkstown (39%) and used by the Rockland Farm Alliance (RFA) was in dire shape. At a crossroads, the county and town could have torn it down but activists and advocates used their weight to convince public officials to rebuild.

The result is a stunning renovation that is more than just an architectural feat. Preserving historic barns will economically benefit the county, the town, and the RFA. Barn preservation in Rockland and beyond creates opportunities for jobs, heritage and agri-tourism, adaptive re-use, retail, office use, and filming and photo shoots.

The average household in Rockland would have to pay an additional $555 in yearly property taxes to maintain current services if not for tourism generated sales and local taxes.

“Rockland will capitalize on the investment it made in the Cropsey Barn,” said a spokesman for County Executive Ed Day. “This is unique to Rockland. It showcases our history.”

The barn has been listed on the National Registry of Historic Places since 2017. In 2006, Rockland County partnered with the town to take ownership of the Cropsey property in order to preserve it as open space. The county gives the RFA an annual $50,000 grant for maintenance.

RFA plans to build out a farm store at the barn, which is not heated, from April to late November. The RFA, a nonprofit that employs 10, farms 12 acres of land, and has traditionally sold most of its produce to CSA or Community Supported Agriculture members who pay the farm upfront for an allotted share of produce on a weekly basis.

Now, with more usable, upgraded space (50 feet by 25 feet), the store will be expanded to makers of organic, locally-sourced products like soap, syrup or jams. Possibly even dairy and meats, depending upon health department requirements. The RFA did run a small farm store in the past but the barn’s precarious condition made it unreliable.

“We couldn’t run the store on a rainy day because it wasn’t safe,” said Rockland Farm Alliance President John McDowell.

McDowell recognizes the renovated barn opens the door for innovative ways to involve and educate the community, as well as draw tourism. Too often, Rockland is thought of as the “pass-through” county for those who are traveling upstate to indulge in greener pastures. The Cropsey Barn’s renovation provides a narrative for Rockland’s past, as well as a working farm that is growing food and raising animals. Tourists as well as local populations gravitate to farms for farm-to-table dinners, farm markets, festivals, education, volunteerism, and for special-event venues.

Anything that brings tourists to the county has the potential to impact other businesses. Visitors who come to the farm may also go to a local restaurant, shop, use a gas station, or stay in a hotel.

Last year, Rockland County gifted 22 nonprofits with $211,000 in tourism grants. The average household in Rockland would have to pay an additional $555 in yearly property taxes to maintain current services if not for tourism generated sales and local taxes. McDowell said the RFA will continue to compete for county tourism grants to promote the farm.

Nationally, barns are some of the most endangered properties, giving way to sprawl, and an abandonment of the farming life. But barns are also an icon on America’s past, and they are often sought out by film scouts for movies and television shows.

For several years, Rockland County, as well as Rockland’s townships, have been courting the filming industry. The Rockland County Guide plugs the county’s attributes: “Rockland County is a multi-faceted destination for filming, with bountiful backdrops just minutes from New York City – such as quaint villages, historic landmarks, mountainous parks, and scenic waterfronts.”

The barn puts another asset into its catalog.

In 2018, Rockland County pulled in $206,000 in fees on county property. How film fees on the farm would be split among the county, town, and potentially RFA, has not yet been determined.

The barn is also an asset for “FAM” or familiarization tours, said Jeremy Schulman, Rockland County’s director of economic development and tourism. Tourism operators scout around Rockland for attractions to promote and package.

“We will add the barn and the farm to the rotation,” said Schulman, adding that the barn rounds out the county’s assets including the Garner Arts Complex, Bear Mountain, the Stony Point battlefield and the Hopper House. “The more we have to differentiate ourselves, the better.”

O&R has supported the farm with a $20,000 grant to support the RFA’s agricultural education program, which teaches low-income students about farming. In the past six years, more than 4,000 students have visited the farm.