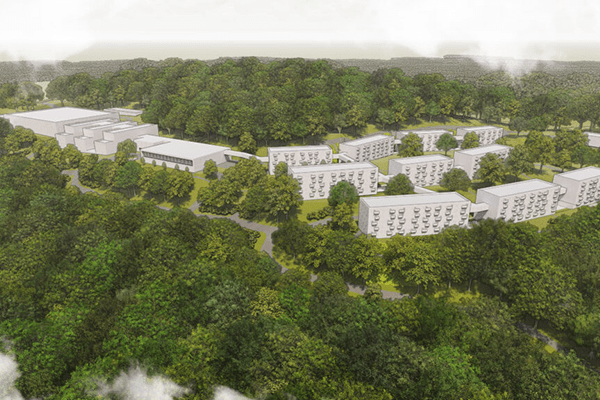 The Town of Ramapo Planning Board is reviewing plans by the Jehovah Witnesses to build a 1.5 million square-audio-visual production center on land partly in Tuxedo but mostly on 242 acres in Ramapo.

Members of the nonprofit group, better known as the Jehovah’s Witnesses, plan to use the building to consolidate and expand various multi-media production offices, which they say make materials about living a principled life.

The new facility at 155 Sterling Mine Road would be almost as big as the Jehovah’s Witnesses’ 1.6-million-square-foot headquarters, located two miles away in the Town of Warwick. Nearly 1,000 volunteers would live and staff the Ramapo media production center.

In addition to studio space, the complex would include offices, residences, underground parking, a fitness area and a visitor center for the public.

The project is currently in the environmental review phase following a July application submission to the Town of Ramapo Planning Board.

Robert Zick, a Jehovah’s Witnesses spokesman, estimated it could take two years for the group to finish planning the project and up to another four to build the complex.

Zick added that it could take significantly less time to develop the property depending on different variables, including how quickly it moves through the environmental review process.

The Jehovah’s Witnesses have described the site as bucolic, full of rock outcroppings, lakes, ponds, streams, rivers and wetlands, while pledging to build in a careful, environmentally friendly way.

Zick declined to put a price tag on the complex, which would merge the Jehovah’s Witnesses’ disparate media production offices near the hamlet of Wallkill, and in the Town of Tuxedo and Patterson, among other locations.

He said the Jehovah’s Witnesses have seen a swell of outside interest from the general public in some of the group’s audio-visual advice materials, including videos offering parenting advice.

Keith Cady, a spokesman for Jehovah’s Witnesses, stated the demand for the Jehovah Witnesses publications and videos prompted the need for the new facility. “Our organization goes to great lengths to share the Bible’s message with others, free of charge. Our printed publications are well-known all over the world, but in recent years, we have greatly increased our production of audio programs and films,” Cady said. “They are now central features of our official website, jw.org; our app, JW Library®; and our annual conventions. We currently film and record in properties throughout the Hudson Valley. This move would consolidate our studio space into one facility near our world headquarters to streamline production.”

Among them are partially animated videos, in which a non-animated human hand quickly draws cartoons on a whiteboard, and a voice-over offers guidance, including in clips such as “Beat-up Bullies Without Using Your Fists” and “How Can I Stop Gossip?”

Media materials for a multitude of languages also would be produced at the Ramapo site.

Jehovah’s Witness sold its properties in Brooklyn and relocated its operations and volunteers to its World Headquarters complex in Warwick in August 2016. Between 800 to 1,000 volunteers live and work at the World Headquarters property. In 2016, the Kushner Cos., bought the Watchtower headquarters at 25-30 Columbia Heights and a development site at 85 Jay St., in Brooklyn for $685 million, according to a report in Globest.com. In 2017, Kayne Anderson acquired the Jehovah Witnesses’ 21 Clark St. apartment building in Brooklyn for approximately $200 million, according to the Wall Street Journal.