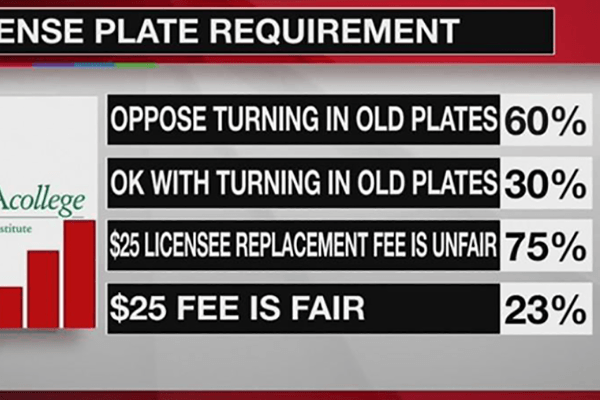 By 2-to-1, NYers Oppose Requirement to Turn In Old License Plates for New Ones; Three-Quarters Say $25 Fee is Unfair; Strong Support to Consolidate Presidential & Other Primaries in April; Cuomo’s Ratings with Voters Improve; Trump’s Ratings Take a Hit

By a 60-31 percent margin, New Yorkers oppose the recently announced requirement that motorists must turn in license plates that are more than 10-years-old and replace them with new plates. An even larger majority, 75-23 percent, think the $25 license replacement fee is unfair, according to today’s new Siena College Poll of registered New York State voters. Ten percent of New Yorkers say they voted in the recent online poll to select a new license plate design, and another third say they were aware of the poll but didn’t vote.

At least 63 percent of Democrats, Republicans and independents support consolidating all primaries next year on one day in April, rather than the currently scheduled April presidential primary and June congressional, state and local primaries.

“New Yorkers of every stripe – regardless of party, region, gender, race, or age – oppose the new requirement to surrender license plates that are at least a decade old for newly designed state license plates. Opposition is smaller with Democrats, New York City voters, and black, Latino and younger voters, however, a majority or plurality of each of those groups oppose this new requirement on motorists,” said Siena College pollster Steven Greenberg. “When it comes to the $25 license replacement fee, New Yorkers are even more united in their opposition. At least two-thirds of voters from every party, region, gender, race, or age group say the $25 license replacement fee is unfair.

New Yorkers Prefer One Primary Day in 2020, Rather than Two, as Currently Scheduled

“Governor Cuomo – who has proposed consolidating New York’s two 2020 primary days into one April primary for all offices – has found an issue that has broad bipartisan support. At least 60 percent of Democrats, Republican, independents, upstaters, and downstaters support holding one primary in April for all offices, rather than the presidential primary in April and other primaries in June,” Greenberg said.

Cuomo has a 48-46 percent favorability rating, up from negative 43-50 percent in August. His job performance rating is 38-59 percent, up from 34-64 percent last month. “Cuomo’s favorability rating bounced back into positive territory, albeit by two points. He saw the most gain with independents, among whom he’s now evenly divided, and upstate voters, with whom he’s now under water by 16 points, a significant improvement from 33 points last month,” Greenberg said. “And by 49-35 percent (little changed from last month), voters say Cuomo has made New York better in the last nine years as governor.”

Trump Favorability Falls to Lowest Since January; Re-elect = 28%, Two-Thirds Prefer ‘Someone Else’ Trump has a negative 32-64 percent favorability rating, down from 35-62 percent in August. His job performance rating is 28-72 percent, down significantly from 34-66 percent last month. While 28 percent of voters are prepared to re-elect Trump, 66 percent would prefer ‘someone else.’ “Trump, with a two-to-one negative favorability rating, has hit his lowest favorability rating since January. His job performance rating, with nearly three-quarters of New Yorkers giving him negative reviews, is the worst it’s been this year,” Greenberg said.