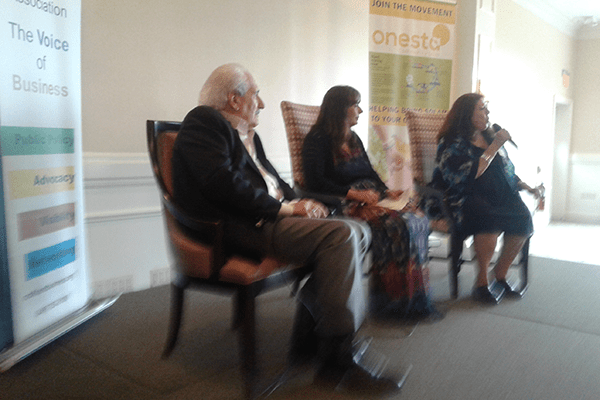 It’s time for representatives from Rockland County’s business, government, and religious communities to create a taskforce to examine the mounting pressures nonprofits shoulder, and to develop road maps to decrease the dependency on the social services safety net, according to Al Samuels, president of the Rockland Business Association’s (RBA) president.

Samuels, at today’s annual business luncheon at Paramount Country Club, led a panel discussion with two titans of the county’s nonprofit community, Diane Serratore, executive director of People to People and Dana Treacy, president of United Way of Rockland County. Both leaders echoed a similar sentiment: the size of the community that is in need is much larger than most realize and the sustainability of not-for-profits is being challenged.

In 2008, People to People fed 300 households a month; today the organization helps up to 4,000 a month. “Things are not getting better,” said Serratore.

Treacy agreed. She said it costs $96,000 a year for a family of four to afford basic living expenses in the county – food, transport, housing, taxes and childcare. “48% of Rockland households struggle to meet basic needs,” she said.

Both Treacy and Serratore acknowledge the role Rockland’s businesses play in supporting nonprofits but they are hoping for more engagement from the for-profit sector to guide the way forward.

“We have to build a culture of community spirit,” said Serratore.

Citing some of the stumbling blocks, the speakers discussed the exodus of some corporate entities like Novartis that were wound tight into the fabric of the county’s life. Samuels pointed out how some companies lease space in the county but go home at the end of the day to New Jersey or Westchester, and are not vested in Rockland’s civic life.

Rockland, like other satellite Manhattan suburbs, suffers from high taxes, but is even more challenged because the county does not have a robust transportation system. Seniors, in particular, find themselves to be dependent on nonprofits. Serratore said in 2008, People To People was helping 32 senior households; today the number exceeds 350.

“No one organization, government, business, or nonprofit can break the cycle of poverty alone,” said Serratore. “We have to do it together.”

Many in the business community lend time, money and support to nonprofits and charities of choice. Samuels worries that Rockland’s business community, like any other, is always evolving but newcomers need to be absorbed more quickly into the community at large so that they feel like stakeholders and are more inclined to support the neediest through nonprofits.

He said the burden rests on the established business community itself to “embrace these folks more quickly.”

While the panel did not discuss the root causes of poverty in the county, they agree nonprofits and for-profits need to widen the net to get more participation and fundraising. A newer wrench in the mix is the new tax code, which has decreased giving by 1% to 2% nationwide, said Serratore, adding more education on the new tax codes are needed.

In the end of the day, Serratore and Treacy concur nonprofits always find a way to assist those in need. It’s part of the nonprofit culture. Do more with less. Failure is never an option because people’s lives are on the line. Folks working in the nonprofit sector are amongst the most creative and resourceful. But Rockland is burgeoning with nonprofits and there’s only so much money to go around.