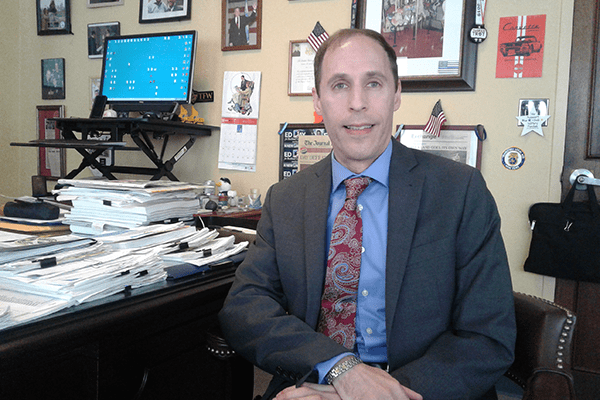 Schulman Is Ready To Take On Economic Development & Tourism In Rockland

Sloatsburg Mayor Carl Wright gets giddy when he talks about grant money that will be used to beautify and transform a 2.5-acre field across from Village Hall into a passive recreation oasis with parking. He says his long-time dream to make this spot the focal point of Sloatsburg would not have been possible without Jeremy Schulman’s guidance.

“Jeremy is an innovator,” said Wright. “Nobody here had ever thought about a USDA (Rural Business Development Grant) before. But Jeremy saw the change taking place in Sloatsburg and he figured out we’d be eligible. He really knows his stuff.”

“I’m always looking for ways to bring resources to the county.”

“I looked across the border at Tuxedo and saw that they were availing themselves of this grant and I thought why not,” Schulman said recently in a sit-down interview with RCBJ to talk about his vision for his new job. “I’m always looking for ways to bring resources to the county.”

Rockland, New York’s smallest county, is a pastiche of rural majesty, Hudson River coastlines, densely-built villages, an expansive retail corridor, and industrial pockets. For the past two years, it’s been, and will continue to be, Schulman’s charge and challenge to enhance the viability of these assets and to keep the county’s economic engines humming.

A demure and gentle man by nature, Schulman couldn’t be more opposite than his predecessor, Lucy Redzeposki, who left a long shadow and became a prominent and popular figure by way of her energy, skill, and effervescent personality. But Schulman is expected to be a steady and seasoned captain, with his hand firmly on the wheel, steering with purpose and care.

A born-and-bred Rocklander, Schulman grew up in Bardonia, and knows the lay of the land. He has a masters in hospitality, tourism and sports management from New York University’s Tisch School. He earned his bachelor’s degree from Brandeis University.

It was during a junior year abroad to Seville that the roots of his career began to formulate.

“Traveling made me notice things,” he said. “I took notice of elements of cities and places that spoke to me. Maps fascinated him. And he admits, without any vanity, that he was a Dungeons & Dragons “nerd” who enjoyed creating places and civilizations. “I really love building a world.”

From 1994 to 1999, Schulman cut his teeth interning in Rockland County’s planning department before spending 17 years as a planner and development manager for New Rochelle. He crossed the bridge in 2017 to head up the REDC.

“This really was a dream job – it brought together the place where I grew up and the thing I love to do,” he said.

For the REDC, Schulman was able to effectively work outside the spotlight, courting companies to relocate to Rockland. He helped attract RK Pharma to Rockland County, which expanded into an existing 83,000 SF building at the New York Center for Innovation campus in Pearl River (IRG) creating approximately 100 jobs, He helped the NYC Football Club open a 25,000 SF facility in Orangeburg employing almost 90 people, and he played a role in the Garnerville Arts and Industrial Center in West Haverstraw rebrand known as the GARNER Historic District.

His latest assignment is higher profile and more expansive, and will likely mean we will see more of Schulman but there will be greater pressure on him to perform. Newer to his list of responsibilities will be to continue the momentum his predecessor began in putting Rockland on the worldwide map, particularly for Chinese tourists.

During his tenure as CEO and president of the REDC, Schulman added two “Gateway Awards” to the organization’s annual Economic Development Awards in 2018. Both the Village of Haverstraw, an urban downtown with an historic streetscape, and Sloatsburg, the gateway to Harriman State Park, were recognized, and seen as catalysts for county tourism.

Rockland is a bastion of opportunities, with its proximity to New York City, the Thruway corridor, an educated workforce, and suburban/semi-rural neighborhoods. There are large parcels of land, like Nyack College and the Chair Factory site in the Village of Haverstraw, Schulman likes to call “signature properties” – large pieces of land that are ripe for re-use. He points out that neighboring suburban counties do not have these kinds of opportunities for development.

And Rockland, he insists, is “open for business.”

Although many in the business community lament Rockland’s inability to court Legoland, Schulman says the county works with manufacturing, warehouse, and commercial sectors to provide incentives though the IDA, O&R, NYSERDA, Empire State Development Grants and other programs.

The Rural Business Development Grand (RBDG) from the USDA, the one for Sloatsburg’s beautification project,  is designed to support targeted technical assistance, training and other activities leading to the development or expansion of small and emerging private businesses in rural areas that have fewer than 50 employees and less than $1 million in gross revenues. Funds must be used on projects to benefit small and emerging businesses in rural areas as specified in the grant application. Uses may include: Acquisition or development of land, easements, or rights of way; construction, conversion, renovation, of buildings, plants, machinery, equipment, access streets and roads, parking areas, utilities.

“We work on packages,” said Schulman. “We show applicants the potential of doing business here.”

Recently, Schulman found his inner James Corden with a video series he’s putting together called “CEOs Commuting In Cars Over Coffee.” He drives around the county with CEOs while touring its assets and talking about why Rockland is the right place to do business. The videos will be posted on the county’s Visit Rockland website.

“There’s nothing better than a testament to market the county,” he said. “We drive around. They tell us why they do business here. They tell us what they need. It’s a very personal way to get the message out.”