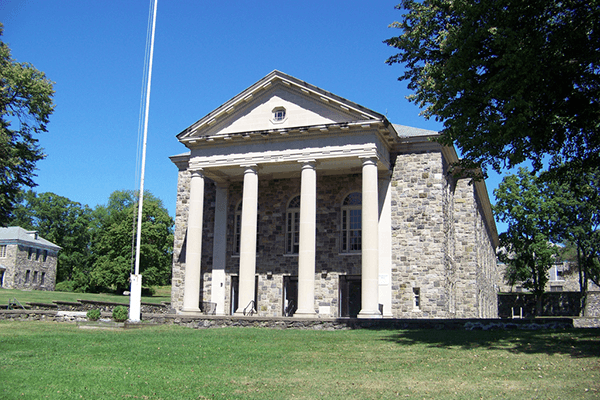 Efforts to redevelop Letchworth Village in Stony Point to a hotel/conference center, update golf course and clubhouse, and possibly senior housing have cleared an obstacle: the state Senate and Assembly this week voted to remove parkland status from a portion of the 200-acre golf course.

Stony Point is eager to sell Letchworth Village and the Patriot Hills Golf Course, which has long been vacant and unable to attract a suitable prospect. Stony Point resident Raj Amar wants to develop the site.

Monaghan said the project, which does not have “a price tag” would not go out to bid.

Rather the town will negotiate with Amar and his partners to “package a purchase” that will include the sale of the golf course, knocking down the former Letchworth building on 25 acres of land, leasing the Kirkbride building back to the town for a 99-year lease, and building a new senior center, either on or off the property.

“The project is well-supported but there are a lot of details to work out,” Monaghan added.

Amar said he is awaiting to see how the negotiation moves forward.

The recently passed bill, sponsored by New York State James Skoufis (D), removed the parkland status from a portion of the 200-acre golf course. Six of the 18 holes on the course are situated on a 65-acre parcel that is designated parkland by the state. In addition, the town has subdivided the parcel to preserve Veteran’s Park.

The town needed state approval to transfer the deed that removes the parkland-designated status where the six golf holes are situated. Town Supervisor Jim Monaghan says the new deed would continue to protect the golf course in perpetuity for recreational use.

Amar, and two partners operating under the name Patriot Park Hills LLC have signed an exclusive memo of understanding with the Town of Stony Point to potentially purchase and transform the 25-acre former Letchworth site.

The group for three months had paid $10,000 a month for the exclusive rights to the land while they undertook due diligence. Amar says there are issues of concern, including deep costs for remediation, and the fact that the golf course is state-owned, but he is plowing forward, and beyond the $10,000 monthly, has already invested more than $300,000 for architectural and engineering services.

Amar wants to upgrade the golf course and make the clubhouse usable and a magnet for golfers. However, the course would remain open to residents. The town now subsidizes the golf course for $1.4 million annually.