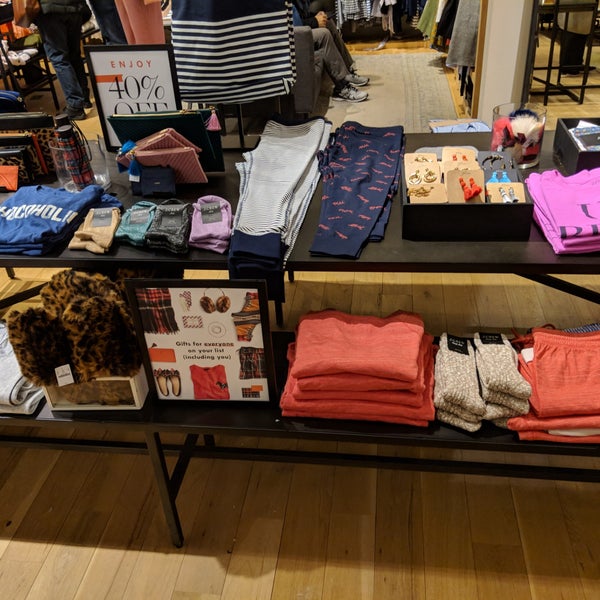 J.Crew Group is moving forward with plans to close about 20 J.Crew and factory stores in 2019, adding to the net closure of 34 stores last year. There is a J. Crew store at the Shops of Nanuet but the company will not specify which store are being shuttered.

“We will continue to opportunistically rationalize our J.Crew and factory store fleet,” said CFO Vincent Zanna on an earnings call last week. The company is focused on fueling growth at its more successful Madewell brand (which it is considering spinning off into a separate publicly-traded company, it said last month) and in the first quarter of the year, it opened 10 Madewell stores and one J. Crew store. The retailer shuttered its Soho location in December 2017 after more than 20 years in the space.

Abercrombie is far from alone in its decision to downsize: More than 7,150 store closures have been announced by U.S. retailers so far in 2019, according to retail advisory Coresight Research. That’s more than the 5,524 closures announced in all of 2018, and the year isn’t even halfway through.

Hollister’s massive four-story flagship has been an icon of Manhattan’s Soho neighborhood since it opened in 2009, but this summer it will close its doors as part of parent company Abercrombie & Fitch’s efforts to improve its profitability.

The closure — which is planned for the second quarter of fiscal 2019 — will be followed by two others: an A&F flagship in Milan, Italy by the end of the year, and another in Fukuoka, Japan in fiscal 2020. Factoring in recently shuttered flagships in Hong Kong and Copenhagen, the company said it will have reduced its physical footprint by over 140,000 square feet — expensive real estate that it said had below average productivity.

“Flagship business is a drag on top line and bottom line,” said CFO Scott Lipesky on a conference call Wednesday, adding that investors should expect further closure announcements in the future. “Given the delicate nature of exit negotiations, we are not prepared to discuss details of potential future closures at this time.”

CEO Fran Horowitz said the company plans to transition to “smaller, more omnichannel spaces” that are better integrated with the retailer’s digital offerings as part of its efforts to improve margins. “Looking ahead, we do expect additional closures through a combination of natural lease expirations, the exercise of pickup clauses and negotiation with our landlords,” she said.