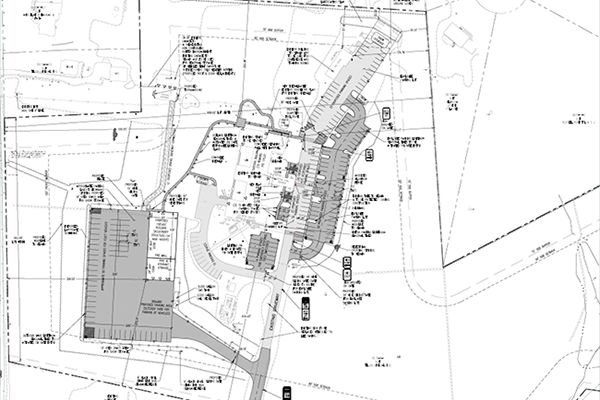 Suez NY on Wednesday presented a plan to lease space, build a storage facility and install above-ground gas tanks at the former Tilcon headquarters on the eastern side of Old Mill Road in  West Nyack. The proposal drew a 200-plus, restive crowd that expressed a host of concerns about the proximity of the plan to Lake DeForest, the county’s drinking source, and to demand a greater level of environmental review for the project.

Suez plans to lease the existing building for offices for construction staff, management and customer service employees. But Suez wants to add a 60,000-square-foot storage yard with a 10,400 square-foot building that will be used to park its fleet of vehicles and store materials needed to maintain their water system including pipes, hydrants, valves, etc. Suez said the new site will better comply with ADA (American Disability Act) requirements.

Tilcon will consolidate its operations at its Haverstraw location.

“Suez is a major business in town, it employs 120 people, and pays $25 million in taxes,” said Lino Sciarretta, Suez’s attorney. “Their footprint (at their West Nyack office) is no longer adequate. It’s too small. The new location is ideal.” 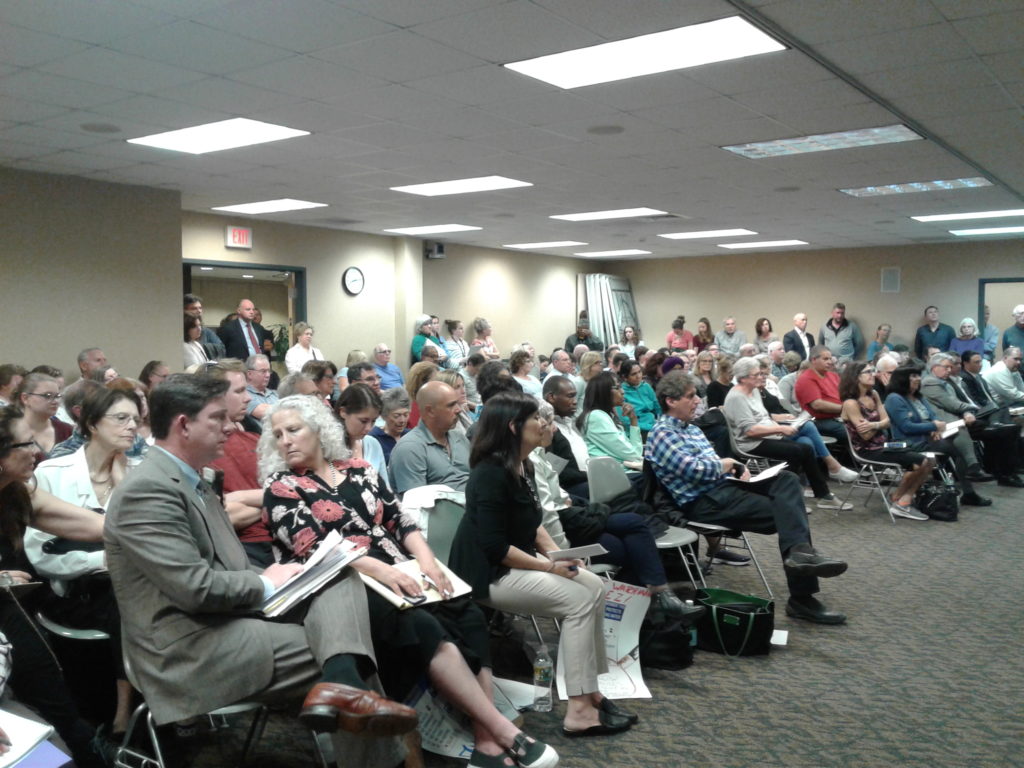 Members of the public disagree.

They cited concern about runoff and potential contamination to the reservoir, the dangers of fuel tanks in close proximity to the water supply, the impact of deforestation, traffic on the winding bucolic Old Mill Road, and disturbance of habitat for many species including the endangered bald eagle and bog turtle.

Suez said its building at 300 West Nyack Road is under contract for sale. They would not reveal whether or not the pending contract builds in contingencies for Suez’s approvals on the Tilcon site.

“Isn’t this putting the cart before the horse?” asked Board Member Peter E. Streitman.

The proposed plan on 26 acres would involve creating 48 new parking spaces for a total of 141 in the parking lots to the east and south of the existing building. Nearly 7 acres, or 305,000 square-feet of land-disturbance, primarily paving and the building of the new structure, will mandate the installation of an extensive storm-water management system. The site lies within a few hundred feet of Lake DeForest, the county’s primary source for drinking water.

Also, Suez wants to locate two above-ground fuel storage tanks for 8,000 gallons of gasoline and 2,000 gallons of diesel for their fleet of trucks and cars to fill up on site. The company will need a variance from the Clarkstown Fire Board of Appeals because the town limit for storage capacity for a tank is 500 gallons.

Planning Board member Rudolph J. Yacyshyn said the above ground storage tanks “presents all kinds of problems.” Suez responded that the storage tanks are needed on site, particularly in the event of a storm like Hurricane Sandy when fuel was in short supply. Suez has below-ground tanks on its site in West Nyack. When asked if below-ground would be safer, Suez responded that above-ground tanks, sheathed in polyethylene and encased in concrete, are more environmentally friendly and easier to monitor.

Suez’s application to build out the property does not require any variances.

Nevertheless, environmental attorneys, activists, and members of the public were calling on the planning board to subject the proposal to greater environmental review during a four-hour hearing in an overheated room with standing-room only.

While Suez characterized the application as “unlisted” under SEQRA (State Environmental Quality Review Act), those who oppose the plan are calling for a “Type 1 action,” which presumes that the project will have adverse environmental impacts and mandates independent study. An unlisted action only requires findings by the planning board.

Deborah Munitz, a member of Rockland Water Coalition concurred with environmental attorneys who describe this as a Type 1 action under SEQRA. She also listed a host of concerns, including inadequate information in the Environmental Assessment Form Suez filed regarding the fuel tanks and fuel storage, wastewater management from vehicle maintenance, floodplains, runoff paths, and the impacts of clear cutting nearly 300 trees that support the hills.

Suez will need to obtain Town Board approval in order to perform work on the existing driveway because Old Mill Road is a town-designated historic road.

The Rockland County Economic Development Corporation endorsed the project, saying in a letter that “Suez is a major business….that has operated in town since 1971.”

But angry residents, many of whom already view Suez as a bad neighbor in the wake of the protracted fight to stop the desalination plant, said Clarkstown should not become another “Flint or Newburgh,” referring to mismanagement of public water systems.

“You lost credibility with the desal plant,” said Board Member Phillip J. DeGaetano. “You’re going to need to prove to me that this project is totally safe,” said. “This is where we live. This is our drinking water. Don’t come in here with fluff and puff. I’m not going to put up with it.”

“Last night’s public hearing at the Clarkstown Planning Board was another step in a very open and transparent approval process for our plan to relocate our headquarters to 162 Old Mill Road,” said Bill Madden, Suez’s spokesman. “We will continue to work closely with town officials on our site plan application.”

In response to complaints that many residents had not been notified, the board chairman ordered the town to send notification of the next public hearing on May 22 at 7:30 to neighbors within a 1,000-foot distance from the proposed site.