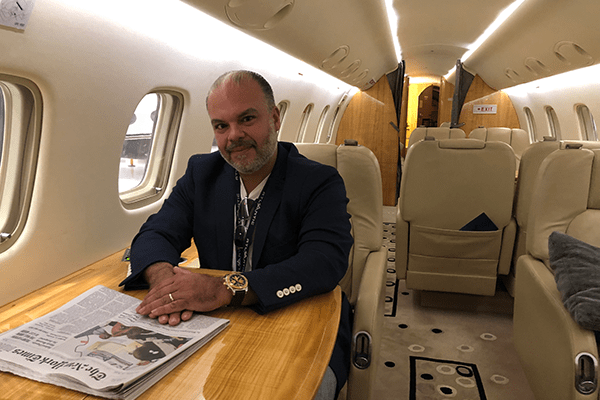 Is the sharing generation ready to fly together? Definitely, says Marc Sellouk, president and CEO of Flewber, a ride-sharing air taxi service set to launch from Westchester County Airport and Farmingdale Airport prior to Memorial Day.

The notion behind Flewber, (a cheeky wink at Uber) and trademarked (smart), is to make private flights accessible to business travelers who want flexibility and hassle-free (no pat downs or shoe removals) travel at comparable prices to business-class fares.

As Sellouk explains it, taking a flight to Boston, Philadelphia, Atlantic City – and soon Washington, D.C., — will be as seamless as ordering an Uber. Using the company-developed Flewber mobile app, passengers book a same-day flight to the destination, and are entitled to a $100 rebate if the transaction includes a ride-share to the airport. Flights cost $700 round trip. Passengers are picked up one-hour before departure. They go through a security check. Aboard, they’re served a latte, a snack, and a newspaper for the 45-minute flight. 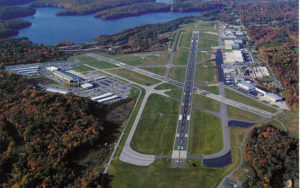 Flewber’s rates are about double those of an economy-class flight that’s been booked in advance. But for the last-minute booking, the gap narrows.

“This will put us in the black against operating costs, and it will be possible to pay back the capital I’ve invested within four months,” said the CEO.

Given the state of air travel, with long lines snaking through security, late arrivals, and zero amenities on board, Sellouk believes the sharing economy is rooted deeply enough in our consciousness and our consumer habits, to make an air-taxi service a profitable business model.

“I’ve built a parallel to what Uber did,” he said. “There was a time when black cars lined up along Park Avenue and catered to executives,” he said. “Uber came in and said ‘why can’t this be available to everyone?’ ”

Innovation is derivative, and when you’ve built and sold a multi-million dollar telecom company over two decades, chances are your next venture will be driven by passion. In 2017, Sellouk sold Transbeam, a provider of managed data and voice services, for $28 million in cash to GTT Communications, Inc. (NYSE: GTT), the leading global cloud networking provider.

Sellouk is poised to indulge his life-time fascination for aviation. Gilded from his buyout, Sellouk put up his own money to purchase Ponderosa Air, a Long Island-based charter operator with a fleet of planes. Flewber will initially have two aircraft in service, and two more by summer. The Piston air craft seat six plus two crew members and the Jets seat eight plus two crew.

FAA regulations require flight operators, those who fly the planes, and brokers, those who schedule flights, to remain independent. Sellouk says he set up two separate companies so he could be both the broker and the operator.

“I wanted to control our destiny,” he said. “Historically, the aviation business has been known as a loss leader. Finding a model that’s viable and profitable is challenging but we have a model that marries an operator and broker together.”

Over the next two to five years, Sellouk plans to scale up the company to include service from hubs throughout the country.

At 42 years old, Sellouk says he’s still young, loves building businesses, and this next chapter of his life will be “sexy and fun” because aviation is his avocation. But he understands a business is far more than a flight of fancy. “It’s all about surrounding yourself with the right people,” he adds. “That’s what I’ve learned over the course of my career. I’ve set up a team with the pedigree it’s going to take to build something that is scaleable and innovative.”