Pharmaceutical giant Sanofi Consumer Healthcare claims a Rockland company is selling stale and damaged versions of its products online, misrepresenting that they are new.

Sanofi accused Hey Pharma LLC of trademark violations, in a complaint filed Oct. 28 in U.S. District Court, White Plains, for allegedly misrepresenting its products.The products are sold on Amazon.com and other websites as new, the complaint states, “despite the fact that they are used, close-out, liquidation or diverted products.”

Sanofi never authorized or granted Hey Pharma permission to use its trademarks, the suit says.

Sanofi is a $108 billion company by market capitalization and its consumer healthcare division is based in Bridgewater, New Jersey.

Hey Pharma, founded in 2016, is headquartered in Bardonia, and is affiliated with MedWiz Solutions. Hey Pharma sells health, beauty and household products.

Amazon.com is its most prominent online outlet, according to the complaint, where it operates as Royal Meds.

Hey Pharma allegedly represented Sanofi products as new when they were actually renewed, used – like new or open box, or used – very good.

“Each brand is uniquely authentic and has earned its place in the lives of millions of customers by consistently exceeding their expectations,” the complaint states. “When the Sanofi products arrive damaged, in poor packaging or not as described, consumers think less of the brands.”

It is asking the court to stop Hey Pharma from using its trademarks or intellectual property, from falsely advertising the condition of its products, and from selling its products in violation of trademark regulations. It is asking for three times the profits Hey Pharma made as a result of its actions.

In its continuing effort to update its zoning code and bulk tables, the Town of Clarkstown is advancing two proposals. 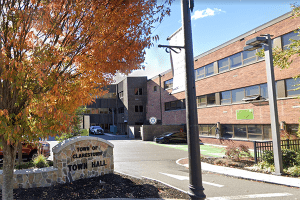 The first would remove the concept of “maximum building coverage,” from the bulk tables, defined as “the percentage of the lot that is covered at the ground area of a building and its accessory buildings, if any” and instead utilize “maximum lot coverage,” which generally includes the building footprint. The change would also allow a developer to exceed the maximum lot coverage by 50 percent without seeking a variance if an engineered drainage mitigation plan was approved by the Town’s Engineering and Facilities Management Department. The proposal also adds “swimming pools” to the definition of impervious surfaces.

Clarkstown has been making changes to its zoning codes to comply with the vision outlined in its recently revised comprehensive plan. Other recent changes involved proximity to places of worship as related to restaurants, parking requirements in various zones, updates to the Nanuet Transit Oriented Development, and residential density in senior housing developments. 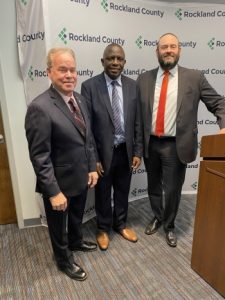 “I call upon the residents of Rockland, and all the stakeholders of human rights work in our county, to give me a chance to skillfully work with everybody in fulfilling my mandate as commissioner of human rights,” he said.

Chiimbwe said human rights transcend race, religion or any groups we subscribe to.

He has volunteered for Congresswoman Nita Lowey, assisting with constituent services and connecting with community stakeholders.

“We are confident that his prior experience will give him a necessary advantage in his new role,” he said, “as our human rights commissioner needs to be omnipresent throughout Rockland,” said County Executive Ed Day.

The position pays $105,000 annually and requires confirmation of the Rockland County Legislature.